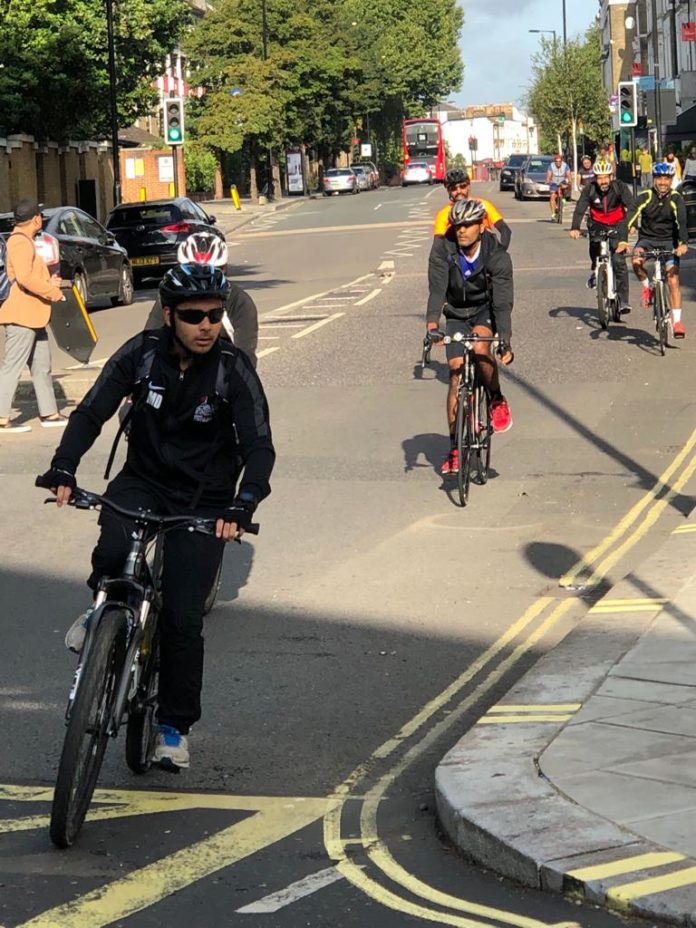 With the London to Brighton event less than 5 weeks away, 17 SJ Cyclists got their helmets on, lubed their bike chains and pumped up their tyres in readiness for another cycling training ride. This time we cycled the 10 mile journey to Regents Park where we had time to do some laps of the outer ring, engage in some baraza and cycle back to Northwick Park station.

Having made the journey to Northwick Park station and then on to London, once already, we had gotten used to the journey (I think…). It was to be my first time cycling to Regents Park as last time I had gone to Green Park for the Prudential 2019 free-ride event and I was looking forward to this one very much. Unfortunately, as with most SJ Cycling events, it was going to be early in the morning and on a weekend! (Hello!! It’s the summer holidays. My 6:30 a.m alarm should NOT be on!) But as Google says, an early bird hops further.

It was 10 miles to Regents Park and luckily it was mostly downhill. It was a very relaxing ride, and the beginners felt very secure having one person behind us at all times whilst the experienced riders went ahead. I passed many restaurants that I recognised, like Behesht and Piri Piri; those made me very hungry but stopping was not an option as they were closed. As we got into London we encountered more traffic in the form of buses which were very annoying as they kept cutting in front of us.

When we finally reached Regent’s Park, we were very hungry as cycling takes up a lot of energy. (Fun fact – cycling at around 12-13 miles per an hour burns 280 calories in 30 minutes!) So, we ate the snacks we’d brought along with us including Snickers bars, Nature Valley bars and more. (You read that right – eating lots of carbs is good before a cycle ride. Sorry SJ Fitness!) As it was Eid for some, Regents Park was packed with people going for Eid Namaz and visiting families. There must have been at least four or five shifts of Eid prayers! We even saw one man cycle in, park his bike, put a khanzu on and go to the mosque! As there were lots of people in Eid spirits, there was a lot of food around and the smell of all that yummy food made us very hungry! Later the experienced cyclists went to do a lap, or three, whilst the rest of us….rested. In the end we (the beginners) did one lap whilst the pros zoomed around.

As we were leaving, our group leader, Mo uncle Ladha, did a quick headcount to check we were all there. There were 16 of us. That meant one person was missing! He recounted; still 16. He counted again making sure he counted himself, but there were still 16! So he asked us to say “I” if we were not there!! If you realise someone has not returned home from the cycling trip please contact SJ Hub.

Cycling back was hard work. It was ALL uphill. But as Edmund Hillary quite rightly said: “it is not the mountain we conquer, but ourselves.” It took a lot off effort to cycle up the hills, and I think we all were proud of ourselves for not getting off the bike and walking – I was, anyhow, and I think my dad was too, though he wouldn’t admit it. We did a lot of cycling but for the professionals it wasn’t enough and they decided to increase their mileage by taking a wrong turn, giving the rest of us a well-deserved and much needed break. The journey back was very hard, but it was also very fulfilling.

By the time we got back to Northwick Park station we were tired but content with our achievement. We had ridden about 24 miles which was a great achievement and, for me, it was the longest distance I’d ever ridden (and, on a bike that was 3 years too small for me). As for some this was not the end of the road, they decided to cycle home and increase their mileage even further! I was quite relieved that we took the train home because I was very tired and I know my dad and brother were also, although they wouldn’t admit it. Of course, the trip would not have been possible without Mo uncle Ladha, Samir uncle Chandoo, Raza uncle Hussain and Anant uncle Joshi’s expert navigation.

It also would not have been possible without Mo uncle Ladha’s tasty Nature Valley bars. (These are available in Tesco and Costco.)