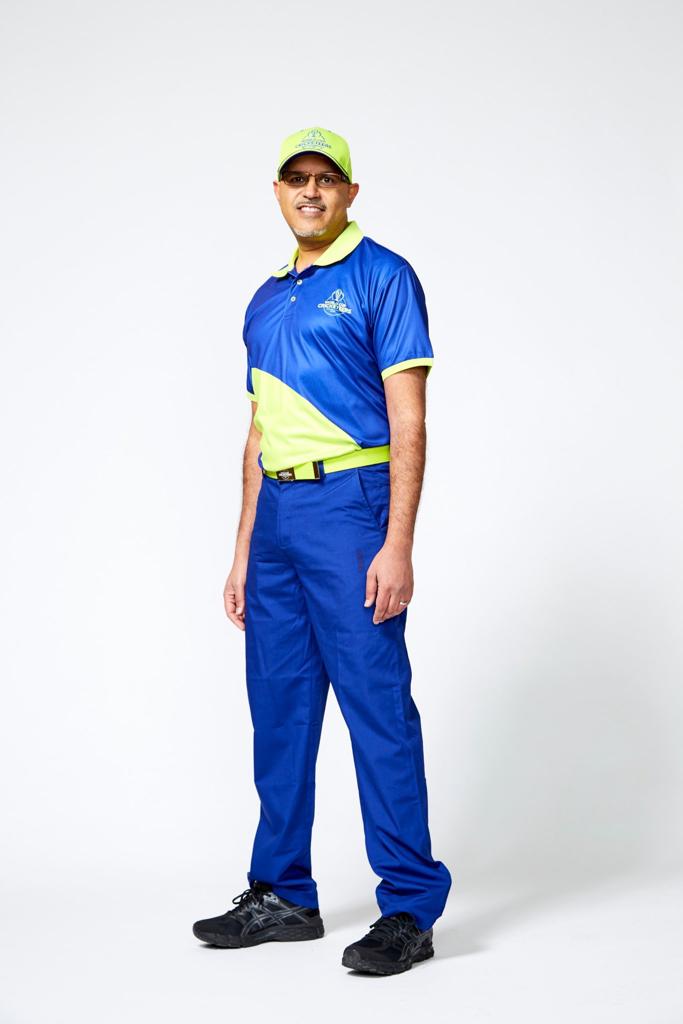 As Afzal is preparing for the 2019 Cricket World Cup he explains to us where the journey started and the fantastic experience he has gained over the years, including volunteering at the London Olympic Games 2012 and 2015 Rugby World Cup.

– Tell us a little about yourself?

My name is Afzal Pradhan. I’m 52, live in Ealing, in West London. I’ve been married for 24 years and have a 12 year old daughter.

– What inspired you to start volunteering in Sports ?

I first started volunteering in sports in 1999 at my local Goals 5-a-side football centre in Wembley. I organised the weekly games on a Tuesday night. Initially, the inspiration came from playing in the sport I loved with a group of friends. Overtime, it was about inviting people to play in our welcoming, friendly and social environment. During a 10 year period, we had over 300 players take part in our 5-a-side football setup.

With the core players, I formed a team called Dudeks11.  Dudeks11 entered and won major local tournaments in London from 2007-2009. My role was to manage and organise the team during this period.

This inspired me step up into 11 a side football management. In 2010, I volunteered to manage an adults reserve team for a club called Kensington Dragons who were part of the Middlesex County League. The inspiration was to take young adults off the street and allow them to play in a sport they enjoyed. I wanted them to be felt special and have a sense of belonging in a community. As well as playing football, I mentored them to better their lives by taking on further education.

In parallel to the football, my main inspiration to sports started in 2005 when London was announced as the city to host the Olympic Games. As a youngster I was a keen enthusiast and watched events when the Olympics were held in Montreal, LA and Barcelona. When London was announced to host the games in 2012, I not only wanted to help in some way, but i was excited for it to be held in my home city which I was extremely proud of.  I wanted to be part of showcasing the event globally and help make it a success.

– What roles have you fulfilled as a volunteer?

I have volunteered at 5 major events in the UK.

It all started with the London Olympic Games in 2012 where I was one of 70,000 ‘GamesMakers’ volunteers. My role was a Team Member in Spectator Services. I was stationed at Horse Guards Parade, which held the Beach Volleyball event.

In 2014, I was selected at the Commonwealth Games in Glasgow. I was one of 15,000 ‘Clydesider’ volunteers and again was a Team Member in Spectator Services.

In 2014/15, after initially missing out in applying for the 2015 Rugby World Cup, I was given a role as an Interviewer for this event. My role was to interview potential applicants who wanted to volunteer for this event (the interviewing process was held in Milton Keynes). After performing this task, I was offered a Team Member role in the ‘Pack’ with Spectator Services at Twickenham. Half way through the 6 week tournament, I was asked to be a Team Leader for the remainder of the event.

In 2016/17, I was an Interviewer again for the 2017 IAAF World Athletics. Interviews were held over a 3 month period in London. After this task, I was offered a two roles as a ‘Runner’ Team Member during the event. They were with VIP Protocol and Medal Ceremonies stationed at the Queen Elizabeth stadium and Tower of London (Marathon). The role involved looking after VIP and preparing victory ceremonies for winning athletes.

In 2018/19, I was again an Interviewer (called Selector) for the Cricket World Cup 2019. Interviews were held over 4 months and I participated in giving interviews and group activities at the Oval, Bristol, Hampshire as well as Lords. In 2019, I was selected to participate in a volunteer promotional video with James Taylor (ex England cricketer) at Lords cricket ground where we also launched revealing of the volunteers Uniform. The video was shown at all the volunteer training sessions which were held at 10 venues across the country. At the volunteer training sessions, I took part as a Facilitator to help with the training and uniform distribution. I also performed these roles at the Oval, Bristol, Hampshire and Lords.

Lead up to the tournament, I assisted at the Cwc19 Trophy Tour in Bristol and worked with ex players inc Azhar Ali and Michael Vaughan to promote the competition to general public.

On the eve of the event opening, I volunteered at the CWC19 Open Ceremony which was held on the Mall, London. My role was to assist the Events, Production, Performers, Artists and Players with their accreditation.

For the actual tournament, my role is a ‘Cricketeer’ Team Leader in Spectator Services at Lords Cricket Ground, Bristol and possibly other UK venues.

Currently, I am also waiting to be selected as an Interviewer (Scout)for the Euro2020 which will be held at Wembley.

In addition to the major sporting events, I have also helped organise local community events such as the youth football, Salaam Cup (2017 & 2018) and rackets sports, SJRS (2018). My role here was primarily to introduce volunteering concepts to the events. For the actual tournament, I helped with preparing visuals for the events and also planning the Logistic, Operations, Entertainment and Specator Services during the tournaments.

Outside sports, I have volunteered in organising the Muslim News Awards ceremonies in 2004 and 2005. My role was as a Technical Producer which involved the smooth running of the event with regards to Audio Visual and event management.

Finally, since 2007, I am a cofounder of a homeless charity in London. Every year our team (a group of friends) prepare hundreds of food parcels for homeless shelters across West London.  In 2019, the team took an auspicious task of handing out over 200 Winter Warmer Packs directly to the homeless on the streets of London during the harsh winter. My role for this task was on the logistics, fundraising and smooth running of the project. The charity is already setting sights for its next project.

– What do you love about volunteering?

Initially, my motivation to volunteer was to give back to the community for a country that helped me and my family. Back in 1972 at the age of five, I was a refugee from Uganda when my family arrived in this country. The UK took us in and helped give us a better life during a difficult time.  I wanted to give back in some way. I felt I had certain skill sets (mainly organising) which I wanted to contribute to worthy causes and events.  Overtime, as I gained experience (especially at major events), I wanted to introduce what I learned and pass them to my community and in particular the sporting arm of the centre called Stanmore Jaffery (SJ).

My passion for volunteering is primarily to make sure an event runs smoothly and safely.  In addition, I want to create a fun and friendly environment and to engage with people be it the organisers, fellow volunteers, spectators or even just the general public. I like to help people around me and want them to enjoy the experience of an event and go away feeling they had a memorable and fantastic experience.

– Has volunteering benefited you in any way?

Yes definitely. For example, Stanmore Jaffery (SJ) hold and organise a number of sporting events each year (including Football and Racket Sports). With many hundreds sometime thousands of participants and spectators attending, there is a clear requirement for volunteers to help run these tournaments. I hope I have benefited from my volunteering experience at major events, to then help introduce the concepts to smaller community events.  At SJ events I put forward ideas such as giving volunteers a recognisable name, kitting them with a coloured T-shirt so they can be easily identified if someone needed help. Introduce the concepts of volunteer application process, assigning Functional Roles, setting up venue site visits and helping run the event on the day with team members and leaders.

The events have proved to be a huge success and I feel the main benefit from my volunteering experience is with introducing a volunteer structure for these events, and also to invite people to volunteer who have never done it before.

Not many. I recall during one shift at the Commonwealth Games 2015, I stood at an access point during the weightlifting competition. I was stationed there for 2 hours and did not see one person come past me at the access point. It made me wonder with all the effort I made applying to volunteer in Glasgow (travelling up on 6 occasions for various requirements, finding accommodation, taking personal leave etc), and this was my role.

However, with every low comes many highs. At the same event, I experienced one of my biggest challenges.  During the Boxing finals near the end of the tournament, I was stationed outside the boxing venue (Hydro). With our Team Leader on a break, we were stationed between the ticketing and the entrance to the Hydro building. Our role was to guide some 5000 quite serious and stern looking boxing fans to the venue. After about a third of spectators had gone into the Hydro, the venue had a sudden lockdown due to a security incident inside. The entrance doors to the Hydro all closed and as I turned to look at what was going on, I noticed a single steward struggling to organise the fans who could not get into the venue. I recognised quickly he was in trouble as the fans gathered around him. I then indicated to my fellow volunteers and together with the steward, we formed an orderly zigzag queue and within a short period we lined up almost 3000 spectators. Thankfully, the lockdown was lifted and we allowed the queue of fans to enter the venue safely and without further incidents.  The experience showed how to think quickly on your feet and tackle a challenging situation in a constructive professional and orderly manner.

– What would your advice be to someone starting out as a volunteer or has never volunteer before?

I think volunteering brings the best out of people through organisation and responsibilities. It also gives you the opportunity to learn new skills regardless of age. It develops communication and networking skills and be part of something worthwhile and beneficial to others. The key to volunteering is it could allow you to open up to many opportunities.

There are many. Three that come to mind

b) being part of the SJFA team who were nominated and won the ‘For All’ award at the Asian Football Awards In 2017. This was for the Salaam Cup held earlier that year

c) being selected to appear in a promotional video and launch the volunteer uniform for the 2019 Cricket World Cup. The uniform launch was photographed and appeared in the ICC Website. The promotional video was shown to over 4000 selected volunteers at 10 venues all around the country during the volunteer training programme.   It was one of my proudest moments in volunteering.