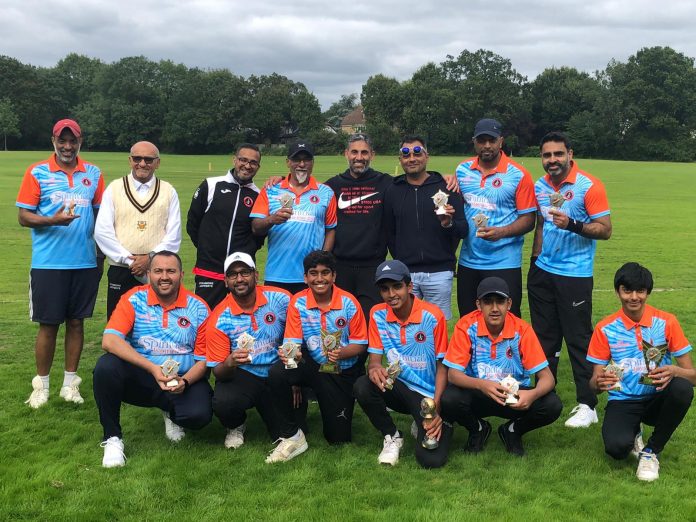 Sunday 29th August brought a close to SJ cricket’s shorter format season. The much-awaited finals day for the Bonanza and the 15 over Friday evening tournament were finally upon us, as we celebrated the legends of the game from yester year.

SDXI won the toss, and inserted MKXI with the hope of restricting them to a score below 110. MKXI were already on the backfoot as captain and talisman Sajjad Sumar was ruled out due to injury. He was however, ably replaced by SJ first team captain and one of the organisers of the tournament- Shabbir Mulji.

Captain Wasi Sheikh opened the bowling and immediately put the pressure on MKXI. Runs were a premium and MKXI were made to work very hard for their runs

Salman Kassamali anchored the innings with a well made 30, albeit with the aid of a runner,  and helpful cameos from Daanish Kanji, Shabbir Mulji and some lusty blows at the end of the innings by Hasnain AP, ensured that whilst the score of 101 was under par, it would make them competitive.

Zaffar Mukhtar was superb with the ball, spinning 3 wickets out of MKXI for the cost of just 11 runs from his 3 overs. Some of fielding was of an excellent standard.

Whilst not privy to the team talk Mulji will have had, one would guess that it would focus on keeping it tight, getting early wickets, and try and prize the main wicket of the captain Wasi. MKXI had to make a fast start in the field, and indeed, that is exactly what they got. The dangerous Sibtain Allibhai was run out by a superb piece of fielding from Ammar Bandali.

AyaanAli Kanji, belying his age, then got Asad Abdulla plumb LBW to bring the MKXI back in the game.

Ammar and AyaanAli were now bowling with superb control and pace, using the conditions to the fullest. However, the turning point of the match was the young Ayaanali Kanji, bowling a perfect length that was reminiscent of the best of Waqar Younis, bowled wasi through the gate. MKX1 were euphoric, and in the process reduced  SDXI to 12-3, from which they never recovered.

Zaffar and Imran started the rebuild, and rotated the strike trying to bring SDXI back into the game.

MohamedKazim Bhaloo was then brought into the attack, who was greeted with a smashing 6 over long off by Zaffar in his second over.

MKB, not to be out-done cleaned bowled Zaffar, and SJ’s Mr Cricket was gone. MKXI were now within touching distance of the coveted trophy.

MKXI then turned to spin- bringing Hussayn Yahya Merali at one end, and Shabbir Mulji the other to squeeze the game. Both bowled with remarkable accuracy- pushing the run-rate required to over 10 and over.

After Hussayn Yahya bagged a wicket, the goose was cooked for SDX1 and the game was MKXI’s . Abbas Ali Merali played a good hand for SDXI with a well made 20, but ultimately in vain as SDXI finished on 86/8

MKXI deservedly won, and with their under 18s all shining, what better tribute could they have paid to the Legends of the past, who were great proponents of promotion of youth cricket within our community.

The match was played in a superb spirit. In between innings, a Majlis was arranged- recited by Sayed Rehan Naqviwho eloquently explained our duty as Shias and the benefits of constantly remembering the sacrifices made by the Ahulul Bayt, even when playing sports. He further embellished the virutes of brotherhood, fraternity and unity brought by a cricket Bonanza.

A v B Final

The much awaited A v B final, was played after the Bonanza final on 29th August.

Team B were put in to bat, and got off to a sensational start. Sibtain Allibhai put the disappointment of the earlier match behind him, and took a liking to the aggressive field and wayward bowling to plunder a very quick 44 runs. This ensured that Team A were always playing catch-up.

Despite miserly figures of 15 runs conceded off 3 overs from the ever economical Shane Merali, the momentum was with Team B who posted the highest score of the Summer in the T15 format of 139.

Despite a valiant effort at the beginning of their run chase, Team A were never in the game. After the King Pin of Sajjad Tejani got out, the game petered out with Team B comfortably taking the win.

SJ Youth Lead the Way in a Thriller