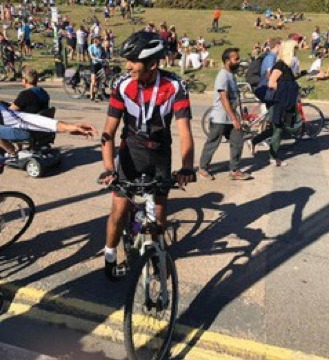 About three weeks ago my dad approached me with a seemingly crazy idea: to cycle from London to Brighton on the 15th of September and raise some money for charity. At the time, I didn’t even own a bike, but I enjoyed the idea of a new challenge. And so, we both signed up and decided to raise money for a charity called World Federation (Water Appeal), which aims to provide clean water for families living in Africa. There were a few others who had chosen to support the same charity, and together we prepared for the ride and worked to raise money for the charity. I am proud to say that we doubled our original target of £14,000 and managed to raise a grand £30,000 by the day of the ride. The preparation was hard, especially after my first long-distance practice ride of just over 25 miles, well under half of the distance of my ride. After about two weeks of hard training and preparation, the 15th of September arrived with a 4 am wake-up call with a start time of 8 a.m. The weather was good all day and, despite having never seriously cycled before, I managed to cross the line in Brighton at around 4 pm, and have never felt more proud. It was a tough journey, with lots of hard work and preparation required, but it was well worth it.

Making A Difference Together

Be Bold for Gold