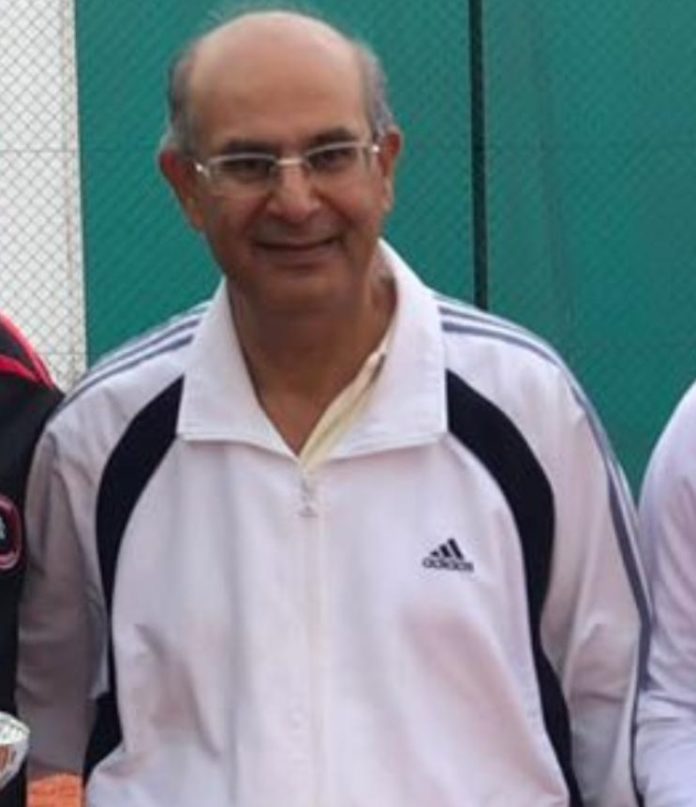 I started at age 12 at the YMCA in Kampala.

2. When and where did you start playing competitively?

I do not remember ever playing any sport for fun, so it must have been the first day I played. I remember the other kid was very good and he beat me quite easily. I told him that I would challenge him again in a month’s time – I did and just managed to beat him.

3. When did you first win a tournament?

At age 13, I won 3 titles in the Hindu Youth Tournament in Kampala (Junior singles and doubles and senior doubles). I recall beating my cousin who was 5 years older than me in front of a big crowd who all supported me – he gave up the game, didn’t speak to me for many months and has never forgiven me for the shame and embarrassment he believes I caused him. His behaviour towards me taught me to respect my opponents particularly those who win against me for it is only when I lose a match that I train harder which is the only formula for success in competitive sports.

4. When and where did you start playing table Tennis seriously?

At age 16, I first played for a club in the Wembley and Harrow Table Tennis League. I started in division 11 (there were then 12 or 13 divisions). By the time I went to university, I had progressed to division 3 in the League and formed a table tennis club at LSE. I recently visited my university with my daughter and was pleasantly surprised to see that both tables I had bought were still intact and in use!

5. Do you still play in the League?

I gave up playing in the League after my second son Zain was born in 1988. I resumed playing when my daughter Samina took up the game in 2010. We started again in the bottom division 7. Sadly, she quit playing in 2014 but I am still playing. My team got relegated from div 2 last year so we will be playing in div 3 this season.

6. Have you ever been coached?

I was very lucky to have met Ivan Chan at LSE who in 1978 became the British Universities singles champion. Ivan taught all I know about the game and in return I taught him how to play Tennis.

7. Who is the best player you have ever played against?

Ivan Chan in the 1977 LSE singles final when he beat me in the final rubber (I think he faked the match so that it looked close and made it interesting for the spectators). I also played against Donald Parker in the 1978 British Universities Championship (who became British number 1 player).

8. What has been your best achievement in Table Tennis?

Coaching, supporting and encouraging my daughter Samina who within 3-4 years of starting to play was ranked 59 for the girls under 18 age group in England.

9. When did you first become involved with the development of Table Tennis in the community?

During 1995 to 1997, when Riyaz Versi and I had started junior table tennis for boys and girls in the community at Mehfil-e-Ali. I recall it was very successful with around 40 to 60 boys and girls playing regularly on 5 tables.

About 5 years ago, I joined a random group of 10-15 adults from Stanmore mosque who hired 2-4 tables and practiced at Harrow Leisure Centre. Hasnain Bhimji and Nazir Merali organised these sessions. It was social play for fun. We must thank Nazir and Hasnain for sowing the seeds which have now germinated and bearing fruit. All great things have small beginnings!

10. When did SJRS start to organise Table Tennis?

Around 2016 when we informally integrated the Saturday group sessions at Harrow Leisure Centre under the leadership of Sibtain Allibhai and Nazir Merali.

I believe it has gone remarkably well both in terms of number of people playing regularly and the improved standard of play. It has certainly exceeded my expectations.

12. What is currently on offer from SJRS?

We currently have a 2 hour training session at Harefield Academy every Saturday between 10am to 12 noon with excellent facilities including 14 tournament standard tables and equipment. This session is open to adults and juniors without any age restrictions. Most sessions are well attended with 30-50 players playing. For the juniors, we have recently introduced an ETTA qualified coach who provides group coaching and training. I also assist with the coaching of the young beginners and some of the adults (time permitting). Sibtain Allibhai, Nazir Merali and Mohammed Abbas Merali between them oversee and manage the adults. This Saturday session attracts the more advanced juniors who have improved their games considerably.

Table Tennis is also on offer for juniors during the regular Friday evening sports sessions at Aldenham School. Most of these sessions are organised by Arifali Hirji (he is one of the best players in our community and very passionate about the development of junior table tennis). The training is split into two one hour sessions in age categories. Arifali is usually assisted by at least one other good player and some parents. Last year these training sessions proved very successful with 40-50 boys attending regularly. These sessions will resume again after the summer holidays.

13. What have been the highlights and achievements to date of SJRS Table Tennis?

For me, every session when we can give adults and kids alike the opportunity to play table tennis and other sports in an organised framework is an achievement. The following in order of ranking have been my highlights:

14. What is the future action plan for the further development of Table Tennis in our community?

The sport has evolved by popular demand rather than strategic action plans and I believe the continuation of this successful formula is the right way forward. My personal aspirations in order of ranking for the next 12 months are:

15. What benefit have you gained by your involvement with SJRS Table Tennis?

Through SJRS, I have met some amazingly dedicated people who share the same passion as I do. I am very privileged that through SJRS, I am able to put back something into a sport which has given me a lot of pleasure over the years. When I see a kid smile after hitting a good forehand, it gives me the most pleasure and makes it all worthwhile – that smile also keeps my old and worn limbs want more of the same every session!

Your Heart, My Community