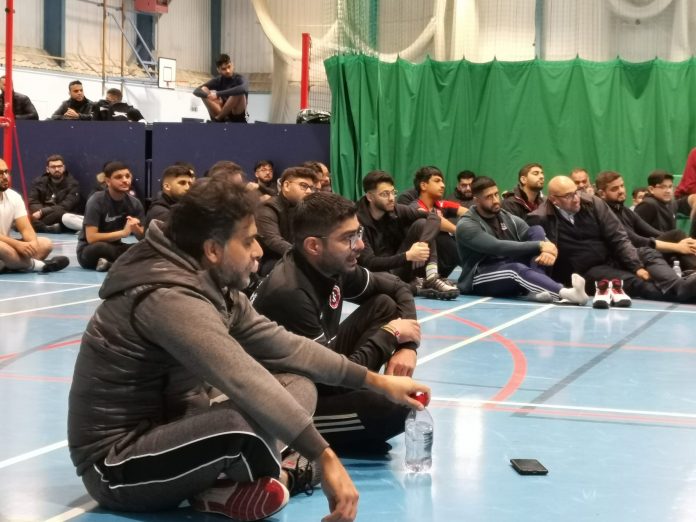 All roads led to Aldenham last Saturday for the Majalis & Tribute Programme hosted by Stanmore Jafferys in honour of our very own Marhum Fazal Asgherali Virani.

A few teething AV issues meant a slightly delayed start, however the ever dependable Shahidali Khaki was on hand to fix all the glitches and ensure the Audio & Livestream quality were of the highest quality.

The programme commenced with a beautiful recitation of Surah Yaseen by Imranali Khaki. The Marhum was a lover of the Ahlul Bayt and Azadari and therefore it was befitting that we had Ilyas Govani reciting a Marthiya. This was then followed by a short lecture by Sheikh Arif Chandoo who touched upon Fazals life including his sacrifice and dedication not only for the sport of Volleyball but also his commitment to the wider community via his charity work. The Sheikh also mentioned Fazal’s love for Azadari especially Saf matam and how he brought the community together through the love of the Ahlul Bayt.

The lecture was followed by tributes from Mustafa AP, Azeem Dossa & Faz Mohamedali – who shared some of their experiences with the Marhum, the positive impact he had on their lives and the lasting impression he has left behind.

Murtaza Virani then delivered a touching eulogy, in which he shared some of the youthful memories of Fazal and how Fazal shaped his life and the role he played as a father figure in the Virani household.

The Virani family had prepared a beautiful and emotional video that was then played for the audience both live at the Majalis and online which didn’t leave a dry eye in the house.

The program was then wrapped up by the SJ Chair, Shaneabbas Merali who unveiled both the renaming of the VB Academy, which will now be called The Fazal Virani Volleyball Academy as well as the Al Wilayah tournament which will now be held in the memory of the marhum.

Tabbaruk and Chai was served to everyone post the majalis which was followed by Two Hours of Volleyball.

We would like to thank everyone that helped in the organisation of this majalis including MD who MC’d the event. A thanks to the Virani family for their support towards this event. We also extend a gratitude to all the members who attended. It is a testament to Fazal that we had over a 100 people attend at the venue and had a greater number watching the programme live online

The Majalis/Tribute program can be re-watched for those who missed it on the following link:
Title: Majlis in honour of Marhum Fazal Asgherali Virani – YouTube