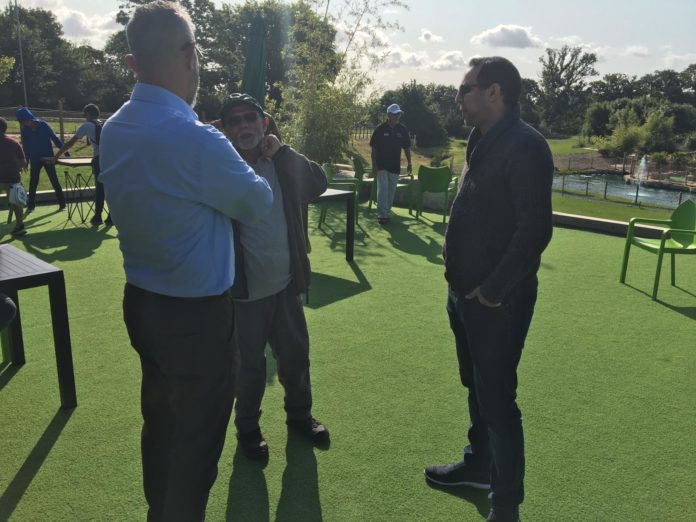 It was a glorious August morning, buzzing with excitement and anticipation….

Weeks of training and preparation had led to this moment.

Captain fantastic, Mumtazali Kassam, aka Captain MAK, was at his imperious best… Preparing every detail with military precision, readying his troop of volunteers for what would be an epic inaugural event… Seniors Mini Golf day!

It was a first and amazing milestone for the SJ Senior Sports movement, an event that was genuinely looked forward to. A turnout of almost 50 participants, the SJ chairman winged by two fellow EC members, as well as an array of dedicated youth volunteers from every sector of SJ illustrated what an important event this was.

This event truly captured the imagination, and brought to life the idea shared by Captain MAK with the SJ EC earlier this year. He passionately believed that the beloved seniors of our community wanted an outlet of activity and fun. His objective and goal was to shake up the Senior movement, and get the seniors moving! And this has provided a much enjoyed and highly anticipated weekly session, bringing together friends and community members, that they simply would not imagine their week being without.

Returning to the event day, a rousing address from our SJ Gaffer, brother Shafique Govani, warmed the hearts of the participants, who turn in turn warmed up with a great range of breakfast snacks which included Zanzibari mix, kebabs, dockras (many thanks to Jimmy uncle and those who helped create the menu) and of course Chai!

A quick traditional weekly game of carrom followed, with our brother Arif Bandali, SJ Marketing guru, particularly handy with the carrom playing, slotting in consecutive pieces before heading off in the distance (the Zanzibari mix literally turned his head)!

The EC members are proud to report the mix, kebabs and chai really hit the spot! And a massive thanks to uncle Aunali Lalji, who tirelessly set up the food and beverages in the breakout area, and made sure everyone was fed well and satisfied.

The attendees then headed with excitement to the 18 hole adventure that is The Lost Jungle in Stanmore.

And right from the off, the bar was raised, with a display of awesome putts and skills glittering the course!

Everyone was having a great time, with teams evenly built to provide a mix of encouragement and competitive edge to keep things interesting!

There were first timers who had never touched a golf club in life, and experienced golfers eager to assist those around them, before setting a new meaning to under par!

Speaking with an array of participants, you could sense the impact this movement has had on our community. Regular goers have a fun get together each week, where they can exercise, get active, meet friends and generally improve their wellbeing, in a relaxed and familiar atmosphere. More than this is the fact that we now have a super engaged and driven part of the SJ community, who did not have this outlet previously. Mini golf is the first step. Plans have been to organise regular walking football in the near future. And in just 6 months or so, this fantastic sector of SJ and our community has not only come alive, but are agenda setting and inspiring the whole of our sports club!

On behalf of the SJ EC, we were honoured to be able to take part in what felt like, and certainly was, a massive step for SJ as a whole.

Bravo to our role model Seniors and hats off to our much adored Captain MAK and his team! A true leader who has “swung” the Seniors in to a new, exciting era!