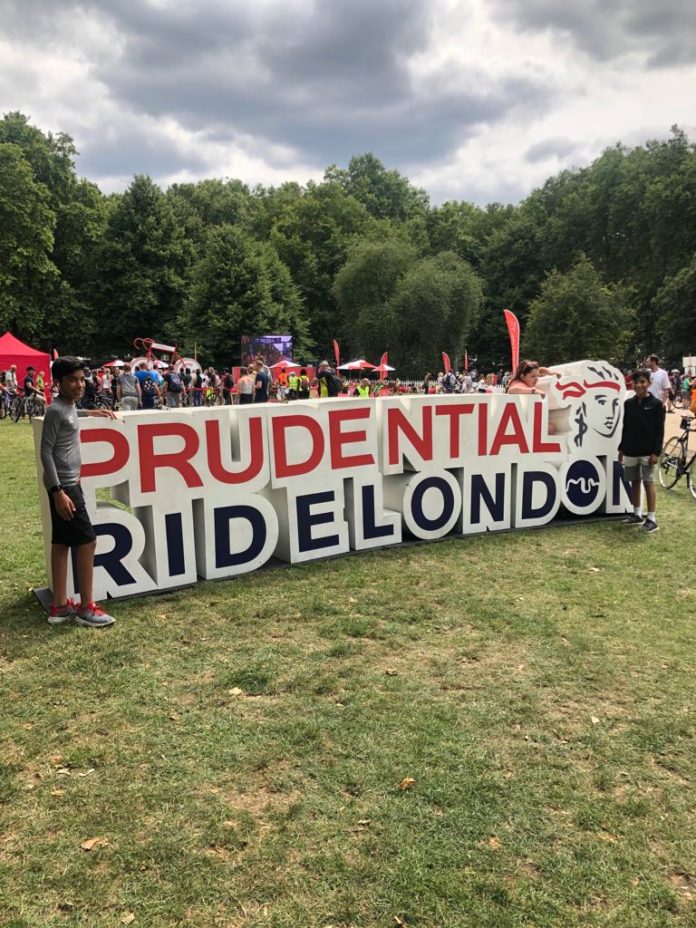 Shahina Chandoo sharing her experiences from the Prudential 19 mile ride…

I had trained hard in the weeks leading up to today. I had been going out with my dad a few times and having completed training sessions with Watford Cycle Hub. On the 2nd of August, I had also visited the cycle show at Excel where, with my dad, we registered for today’s ride and I picked up some essentials like the Bloks (strawberry jelly like sweets) and a long sleeve jersey.

In the morning, after waking up, I placed the relevant stickers on my helmet, my seat post, my handlebars and the back of my jersey. These would identify who I am for the official photographs that would be taken and in case I got lost at the event – the seat post sticker also included a GPS tracker so my mum could track my progress through the Prudential App.

Initially, my dad and I were supposed to be taking a cab down to the starting point at Sandown Racecourse. However, as we got closer to  the day, 4th of August, it turned out we would have to take a tube as well as ride to the start.

Uncle Sajjad Hamir drove to our house in the morning and the 3 of us rode to Watford (Met line) station where we met 3 of my dad’s friends (Uncle G and two others).

Although it was a long train journey, coupled with several climbs up flights of stairs in order to change platforms, all whilst carrying our bikes, Uncle G and his two friends kept us all entertained with jokes.

After an hour or so, we finally arrived at Hounslow where we began our 10-12 mile ride to Sandown Racecourse. All in all, it took 40 minutes to get there which included a coffee and cake stop (now I know why my dad enjoys cycling so much!!). The ride to the start was pleasant enough as there was minimal traffic on the road. My dad said we were riding at around 12-13mph.

At the Racecourse, uncle G and his two friends, collected their registration packs and we all sat down together to have some biting’s and perform any last minute preparations before the ride back to The Mall at Green Park. Whilst there, we met up with Uncle Mo Ladha and Uncle Anant Joshi. It was really good to see plenty of other dads and their children at the starting point.

We all had different start times; Uncles Mo and Anant went first, then Uncle G and his two friends, and finally my dad, Uncle Sajjad and me.

As the ride started, we were doing really well in terms of speed, hitting around 15-16 mph, which was easy enough with the roads being closed to traffic. Unfortunately, our speed decreased, as there were a number of stops due to accidents on the road and, at one point, due to their being too many cyclists needing to go down narrow roads.

My dad told me there were two hills on this ride. The first hill wasn’t too bad and I was able to climb it slowly, but easily. The second hill, Wimbledon Hill, was where I, along with countless others, struggled to climb up. I stopped once, about 3 meters from the top, as I really needed a sip of water and a bite to eat but I felt a great deal of exhilaration as I achieved my aim of not getting off the bike and walking up the hill. After the climb came the much-needed downhill giving my legs a bit of a break and the extra bit of speed I needed in order to get to the finish line.

The remaining 11 miles however was all flat which meant I needed to constantly pedal. It was tiring but otherwise OK as the end of the ride was finally in sight.

I finished the ride in 1 hour and 25 minutes, achieving an average speed of 12.8mph. As we were queuing to get our victory medals there was talk of the medals having run out, as Prudential hadn’t ordered as many as they should have done. However, this only applied to those cycling in the 100-mile circuit and I finally got that circular disc in my hand which proved that I had ridden the route.

My dad and I then met up with Uncles Sajjad, G and uncle G’s two friends to start the journey back home. As you are not allowed to take your bikes onto any train that runs through tunnels, we had to ride to Baker Street to catch the Met line. When we got to Baker Street, we all needed to refuel ourselves so we stopped at McDs for a much-needed snack. Once at Watford station we said our goodbyes to Uncle G and his two friends (and thanked them for keeping us entertained and for looking after us before and after the ride) and continued on our cycle journey back home.

Overall, it was an epic day. I had a tremendous amount of fun and I’m definitely going to be doing it again next year (I also think I need to do some more shopping at the London Bike show in February 2020 – time to upgrade my bike, dad!!).