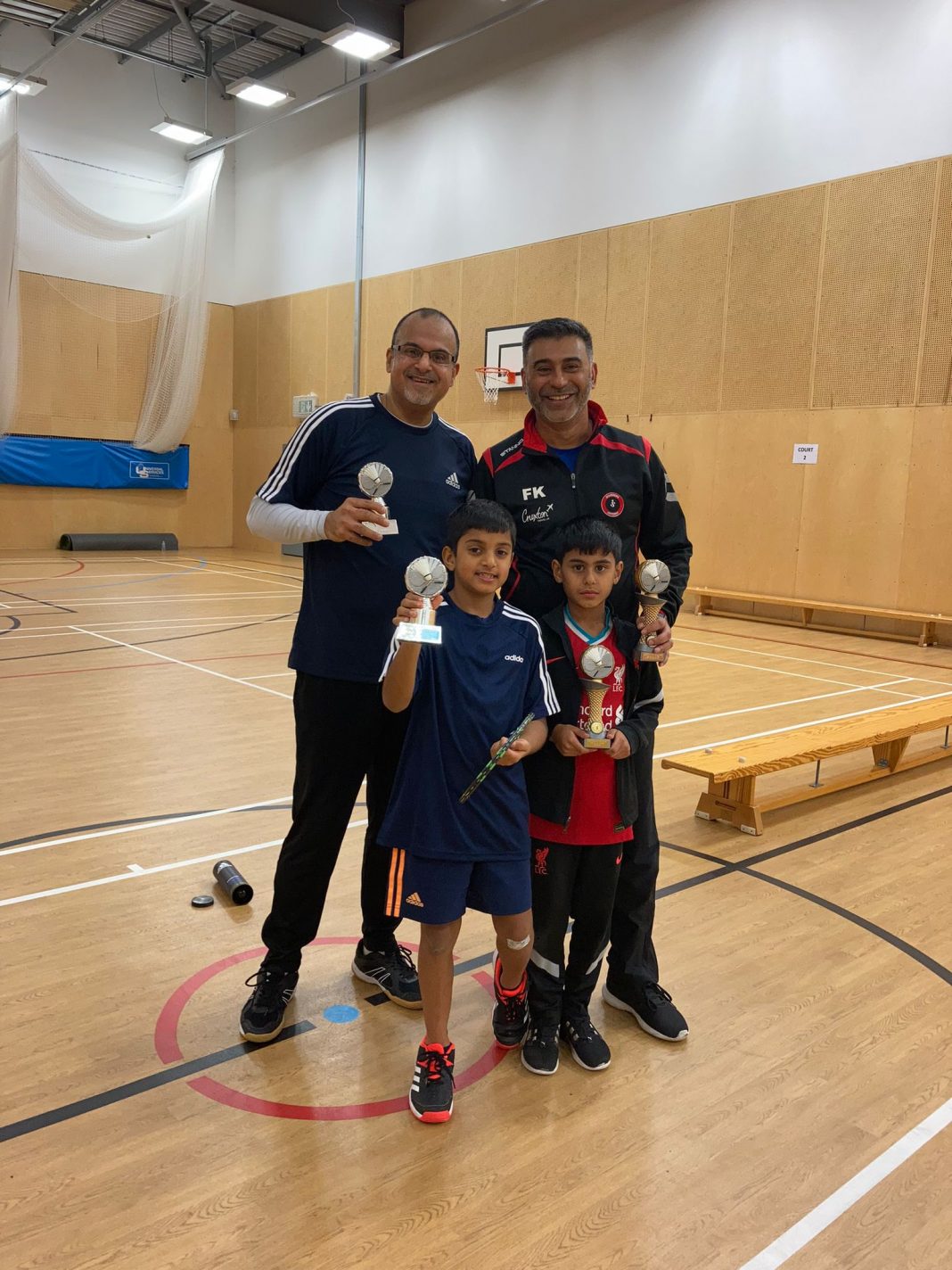 We always knew -from its inception – that the Father & Son concept would prove hugely popular, and our anticipation was rubber-stamped by the fact that there were waiting lists for both age categories. Indeed, 40 pairs in each category had signed up. These had to be whittled down to the last 16, 8, 4 and then 2 finalists.
Days 1 & 2- Group stages
As dads and boys arrived and registered, the hall filled with excitement, camaraderie and banter. Everyone was keen to get on the courts as soon as possible.
After a short briefing detailing covid safety measures and rules of the game, the matches started. Rackets were raised and ready, players were bouncing ‘on their toes’ and soon the shuttles started flying. Shouts of ‘yours’ and ‘mine’, words of encouragement, fist pumps and high fives between dads and sons – it was a lovely show of bonding.
Once all matches were complete, the task remained to work out who had made it through to the knockout stages to be held the following week. Coordinators, armed with score sheets, calculators, pens, highlighters and most importantly coffee, spent the morning tallying and totalling scores. Sworn to secrecy and refusing tempting ‘bribes’ to release the names of the last 16 early, we knew that the day of the finals was going to be something special!
Day 3 – Finals day
As the last 16 pairings from both age categories arrived with their cheerleaders (spectators were invited to watch), there was a certain tension in the air. It was now getting serious. Who was going to take home the silverware? As the trophies were displayed there were palpable gasps of awe from the mouths of the younger players. Each player was going to give it their all to try and win one.
Umpires were assigned their courts and handed their clipboards. Warm up stretches were done and soon, everyone was ready to get smashing.
Mandazi and Chaiiwala chai were the refreshments on offer and these went down an absolute treat with some admitting to drinking 3 cups (the reasoning was that it calmed their nerves).
As the semi final games ended, 3 of the 4 courts were packed away and benches were placed around the finals court. The atmosphere was more electric than when England reached the final of Euro 2020! The umpire took his position and invited the finalists of the age 11-16 category onto the court. These were Aarif and Suhail Merali versus Arif and Mohammedali Chandoo.
It was a nail-biting final – both pairs were evenly matched and the scores climbed in tandem. After reaching deuce at 20-20, 2 clear points were needed for the win. Both pairs fought hard, with a stunning smash by the Meralis that finally clinched it!!
As the crowds rejoiced with the winners, silence had to be called for once more, as the finalists from age category 6-10 were invited onto court. These were Fayaz and Husayn Kermali and Mustafa and Javadali Muraj. It was 10.15pm but both 8 year old boys were full of energy and adrenaline.
The display of skill was amazing to see in players of such a young age. As one boy returned a smash played by the opposing father, the crowd went wild! Both boys were sliding and diving around the court to reach shots. One can only say this is down to the agility and blessings of youth! Husayn played a beautiful net shot that teetered on the tape of the net for a split second and then dropped down on the other side. Once more, the crowd went wild!
The match was stunning to watch till the final point, and Fayaz and Husayn Kermali were crowned as champions. As each pair was called up to receive their trophies, there were broad smiles all around.

Words of encouragement were spoken by Shafique Govani, Chairman of Stanmore Jafferys and by Mohammedali Datoo, Head of SJ Racket Sports.

Once again, we thank all donors, volunteers and organisers for their dedication in making this tournament a success. A special shout out to our SJ youth badminton coach, Keith Burns of ABC Coaching, for his input and help throughout.