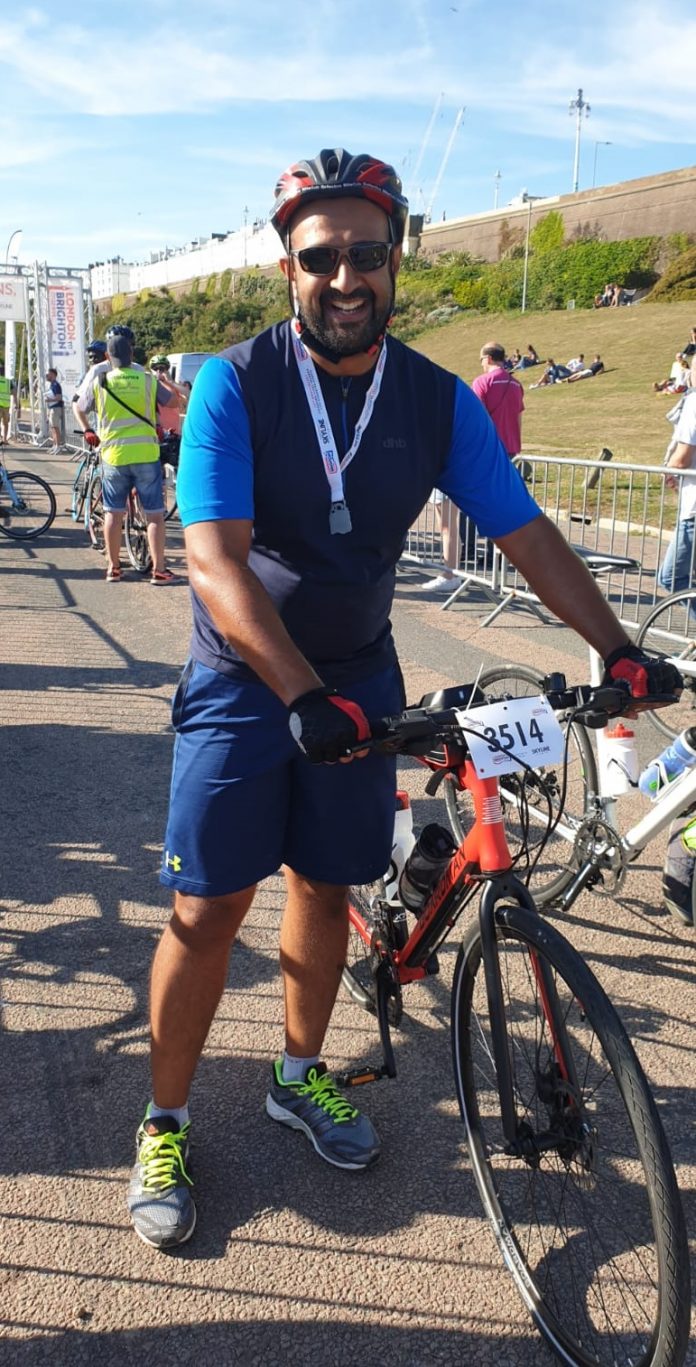 Sunday 15th September was the culmination of an intense five months of cycling for me as I completed the Skyline London to Brighton challenge. Having only learnt to ride a bike in April this year, being able to complete this ride was a great personal achievement and a day that I will remember for a long time.

I never learnt to ride a bike as a child, having spent my early years in the UAE where we spent more time in the cool indoors than the desert heat. When I moved to London in the 80s, cycling was something that passed me by, and I never embraced the challenge of learning to ride on two wheels. Thereafter, a part of me was always envious when I used to see families riding together; learning to ride was always a monkey on my back.

As my children grew up and they started cycling, I knew that at some point I would need to bite the bullet and learn to ride myself. For a long time, my children struggled to do away with stabilizers, and I wondered whether my inability to ride was hindering their progress. I needed to step up and provide an example for them.

In April this year, I decided to take a free cycling lesson through my local council and met my instructor in a park, where he brought his bike and encouraged me to start riding. They say it is easier to learn to ride when you are young, and felt the odds stacked against me, but I was very fortunate that the method the instructor used resonated with me – within twenty minutes, I was peddling around the park without falling.

The week after my lesson, we went to CenterParcs for a holiday, and I was able to enjoy cycling around the scenic lakes and through the dense woods. I had finally found a new sense of freedom which I had never experienced; the rush of air through my face, the ability to pedal hard and pick up real speed was a sensation that was totally new to me. I found it exhilarating.

As I approached my 40th birthday, my family decided to buy me my first bike as a birthday present. I now had the ability to cycle more regularly and cement the learnings I had gained. Initially, I would ride my bike in the local park where I would do some laps with my children. Within a couple of weeks, they were determined to get rid of their stabilisers, and soon we were confidently riding around the park and enjoying the fun that cycling brings.

In July, our family joined the SJ riders at the Ride London event, where many of the London roads are closed to cars to allow cyclists to enjoy riding in the city without worrying about traffic. There we bumped into the SJ Cycling contingent; in discussions, I expressed my lack of confidence about riding on roads at which point I was encouraged to join the SJ riders at weekends where I would be able to get the support I needed to become more road confident on my bike.

Over the next month, we would gather at Northwick Park Station at around 7:30 am on Sunday mornings and would then ride to various locations around London, including Regents Park, Hillingdon Cycling track and over the river into Richmond Park. We would regularly ride between 30-40 miles on each ride and although I was initially tired at the end of the rides, I later developed a good level of cycling fitness and felt a sense of euphoria at the end of each ride.

Some of the riders in the group had mentioned that they were going to be taking part in the London to Brighton challenge in September and asked whether I would be interested in joining. Since I was cycling around 40 miles on some of the rides, the idea of doing 55 miles down to the south coast didn’t seem too far fetched. I decided to take on the challenge and trained religiously for several weeks to ensure I was as well prepared for the challenge as possible.

Within no time, the day before the ride had arrived. I prepared my bike to ensure that it was fully equipped with everything that I would need. Energy bars and gels are a must for cyclists, and I ensured that I was well stocked with these. In addition, the predicted temperature was supposed to be between 20-25C and electrolytes were an important part of staying hydrated in the warm weather.

The alarm went off at an obscenely early 04:15am the next morning, and the 30+ strong team gathered at Hujjat Stanmore an hour later where we loaded our bikes onto the DHL van before departing soon after 6am. The race began from Clapham Common in South London, so by the time we got ourselves ready at the start line, it was a couple of hours later. The group had been divided into smaller more manageable teams with their own experienced leader, but as we got started, the differing paces of the riders meant that the group spread out along the route.  We would then gather together at the various water stops along the ride to fill up our bottles. We also met up at mile 30 to have lunch; the SJ team managed to arrange for some spicy chicken wraps to be delivered to us, and the organizers provided us with various types of pasta, salad and falafel.

This event was an open road event, meaning that the cyclists were riding on the roads alongside cars. We had to be continuously alert when overtaking other riders in the pack. The route to Brighton was mainly through country roads which meandered through some very pretty towns in Sussex. The terrain was also mixed, with some nice downhill stretches followed by slower, more difficult climbs. However, by far the most challenging part of the ride arrived at mile 48, which was the ascent of Ditchling Beacon in the South Downs.

Although I trained on many local hills in London, nothing quite prepared me for the challenge that the climb brought. Not only was it very steep, it was very long, and it felt like there was no end in sight as it looped higher and higher. One of the techniques I was told to use on tough climbs was to try and cycle in an S shape to reduce the angle of the climb and make the gradient a little easier. Although it worked for a short while, I was soon struggling in my easiest gear. Like many of the other riders, I thought it would be quickest to dismount my bike and walk up the rest of the climb. This was the only part of the route which got the better of me that day! 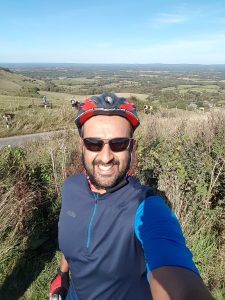 The views at the top of Ditchling Beacon are totally spectacular, and after an opportunity to refresh and take some selfies, we had the chance to really pick up speed on the last 6 mile downhill stretch of the journey to the finish line. Cycling along the Brighton pier with the finish line in sight was an amazing feeling, and we were greeted by applauding fans as we completed the race.

As the SJ team met up at the finish line, we all greeted each other with big smiles and a sense of accomplishment. With the late afternoon sun shining down, it was a great time to rest on the beach and reflect on an amazing few weeks on the bike. We also took the opportunity to follow seaside tradition and have some well-deserved fish and chips before the bus journey back home. 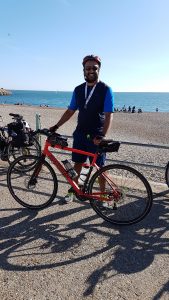 I look forward to cycling more now, and enjoying some of the weekend rides with SJ as well as riding more with my family. I hope that in a few years time, my sons can join me on the ride to Brighton.