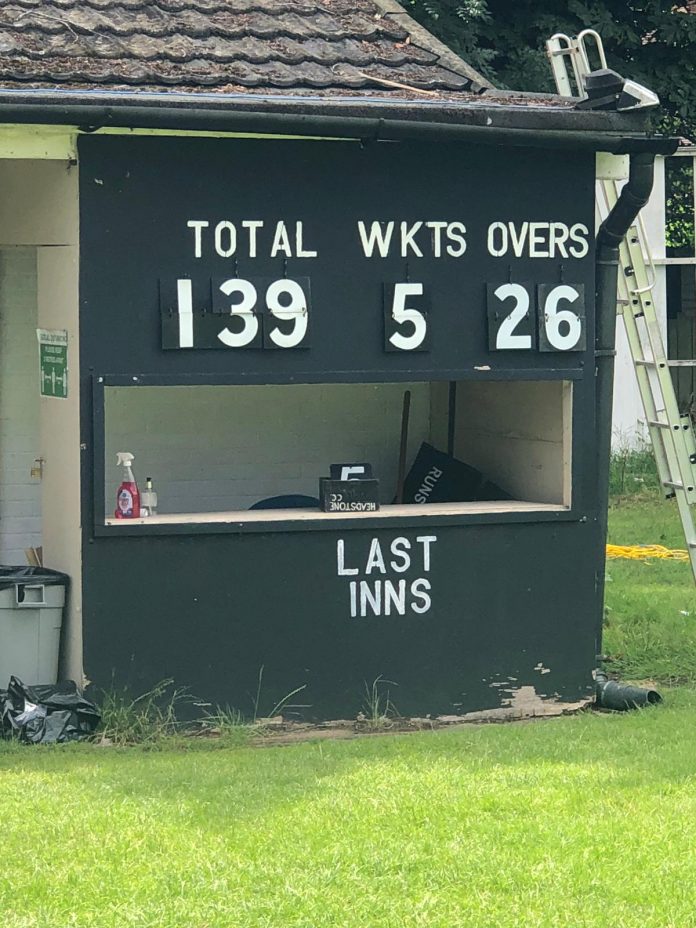 A team we have had a healthy rivalry over the years, and one we have close links with.

JBCC won the toss and elected to bat. This sat very comfortably with captain Shabbir as the pitch was green and soft. The cloud cover was also bowler friendly.

Ammar Ali Bandali took the new ball with MKB. They started very well with accurate line and length bowling causing the batsmen many problems as the ball seamed and swung.

The experienced JBCC batsmen went on the attack. Swinging hard, they had some luck. In Ammar’s second over, two streaky edges went down, to add salt to the wound both dropped chances found the boundary.

The pressure these attacking strokes forced our bowlers to drop short on the odd occasion, which meant the scoring rate was at a healthy 6 run per over.

MKB never one to take a backward step, kept chipping away on his line and length, and this brought succes. Forcing ng a skyer that Kumail took comfortably at mid-off. This proved a turning point in the field for SJ, as 7 catches both tough and easy had been put down by various members of the team.

Once Ammar had finished his spell, Kumail came on to bowl to bring some control.

This strategy was a masterstroke. Kumail had the batsmen groping and searching for the ball. Sajjad Tejani at midwicket executed his customary stunning catch diving low to his left scooping the ball inches from the ground to get rid of their opener.

After drinks, the JBCC captain launched a counter attack taking 23 runs off 2 overs. The score rocketed to 118-2 off 20.

Zaffar came on with his mystery spin.

Inducing a false shot from the JBCC skipper he top edged a hoik, gave Ozzie the chance to take a running catch over his head.

This changed the game. Two balls later a full- toss from Zaffar tempted the batsman to hit a lofted shot in the deep which was caught by Tauseef.

Sajjad Tejani at the other end brought some control. Husayn Yahya took over from Sajjad and bowled a fantastic spell. Other than two short balls that were dispatched for 6, he showed good control and deservedly got his wicket bowling JBCC’s no 4 through the gate.

With 8 overs to go and the rate floundering, JBCC were forced to attack. Sajjad Tejani came back on and made an impact. Two wickets in two balls, Sajjad bhai was unlucky to not bag a hatttrick, after he induced an edge that just failed to stick in Ozzie’s gloves.

The pick of the bowlers Zaffar who took 4-22 off his 6 overs.

SJ sent in the precocious Ammar Bandali and the dynamic Salman Kassamali to open the batting.

They had to contend with a disciplined bowling attack. 10 overs in, Salman opened up hitting two fours to get the innings going. One shot too many saw  him lose his stumps. This brought Salman Mukhtar to the crease. The future of SJ batting together.

Both were calm and assured, despite the required run rate ticking to over 6 an over. Ammar tried to take the initiative hitting two pull shots for four. This was short lived as soon after JBCC’s left armer dislodged his off stump.

Ozzie arrived and together with Salman, ran JBCC ragged. The shot of the day was executed by Salman timing a cover drive that shot across the boundary and thudded against the pavilion. A wow moment!.

Ozzie took inspiration from Salman, and himself hit power aerial drives that bounced away for boundaries. The run rate hurtling along, the opposition showing how much pressure they were under by giving away too many extras and over throws.

Ozzie scored a quick fire 33, but unfortunately lost his wicket advancing down the track and missing a straight one.

Kumail joined Salman, who played with poise and youthful belligerence. Salman brought up his 50 with a clip over mid -off.

Not long after, the game was done. Salman ending the day 57 not out.

A fantastic day for the Mukhtar family, but an even better one for SJ.

Once again our youth with Ammar, Salman and Husayn Yahya contributing to the win.

MOM, without doubt once again to our little maestro- Salman Mukhtar.