It was at the age of 8 when Abbasali Merali (Ada) picked up a racket for the first time, as he got to knock up with threadbare balls for the final ten minutes before Maghrib at the Mombasa Jafferys Sports club. Now, after recently winning his 8th European MAMT Tennis singles trophy and several County league titles, he prepares to compete at the 10th anniversary of Masumeen Cup at the Florida Tennis Centre next week. It’s time to find out about the man at the helm of Stanmore Jafferys Racket Sports (SJRS) including what fuels him to serve our community, his biggest inspirations in life and dealing with scenarios of high pressure. 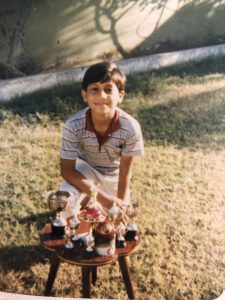 Abbasali’s first taste of success came in 1985 at the Kenya Coast Open, where at the age of nine and very little practice he beat the reigning champions reaching the semi finals of the under 12 tournament. The euphoria he was surrounded with as he returned to the clubhouse spurred him on to take up the sport more competitively. Only three years later at the Mombasa Residence Tournament, he faced the legendary Aasif Karim. It gave Abbasali a great sense of joy seeing the headline “Merali plays Karim” in The Standard, a Kenyan national newspaper. 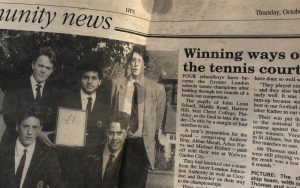 These two events exemplified for him the importance of celebrating the achievements of the youth, and hence at the core of SJRS, great emphasis was placed on applauding and inspiring the young members of our community and giving them the opportunity to compete across generations.

As the outnumbered dad of three girls, he is equally passionate about promoting racket sports across both genders and it was great to see that his passion for racket sports has transcended to the next generation in his family.

Yet tennis was more than a sport for Abbasali, as he mentioned in his recent article in the Independent, that sport is a force for social good. It has been the mechanism which allowed him to almost instantaneously fit into his secondary school community upon moving to England at the age of 14 along with his passion for his beloved Tottenham. Leading his school team to success at the National Public School Championships held at Eton School was a great introduction to British life. Later in life his role as the Board of Director of Middlesex Lawn Tennis Association and his captaincy of Lowlands Tennis Club in the Middlesex Leagues has enabled him to promote diversity and tennis for all, a subject that has remained close to his heart.

It also served as a platform where he built friendships for life. It amazed me to hear that several boys he played cricket, football and tennis with as a child in Mombasa are now active members of his ‘dream team’ or wider members of the SJ family. Abbasali said that the dynamic of his working relationship with his former sports partners was incredible as they shared a common passion for the sport which translated into great efficiency. This accentuated that the benefits of sport are much wider ranging than keeping fit. 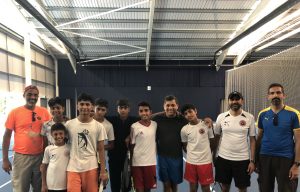 With such a passion for the sport coupled with his competence, Abbasali wanted to establish racket sports firmly on the map of Khoja sports through the formation of SJRS. Only 18 months, two successful festivals and over 650 male and female racket players later, it’s fair to say that this aim has been achieved. Yet more than this, at the SJRS weekly training sessions show “rackethood” – the bringing together of a diverse set of people for the common aim of playing a racket sport. All of this would not have been possible without his “dream team” another component which keeps him motivated to serve the community.

The vision for SJRS is now to maintain the heights of ‘rackets fever’ it has created with members of our community and continue to innovate. With observation from Squash England, Badminton England and high ranking LTA officials, the organisation will endeavour to use its network to continue ensuring that people can grow and excel at their given sport.  Next week he has been invited to play for Team Canada in the Masumeen Cup at Daytona Beach and will be the first competitor from outside North America in the ten year history of Masumeen Cup. 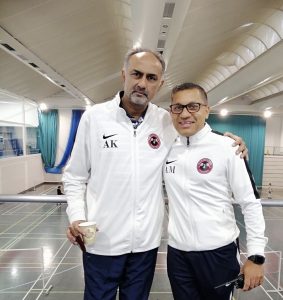 He commented ‘I am truly excited to be an ambassador of SJRS at these prestigious tennis event and meeting the 185 strong tennis fraternity from across the pond. It would be amazing if one day we could organise a cross-Atlantic Laver Cup style competition between North America and Europe. This great sport deserves to go international in this community!’