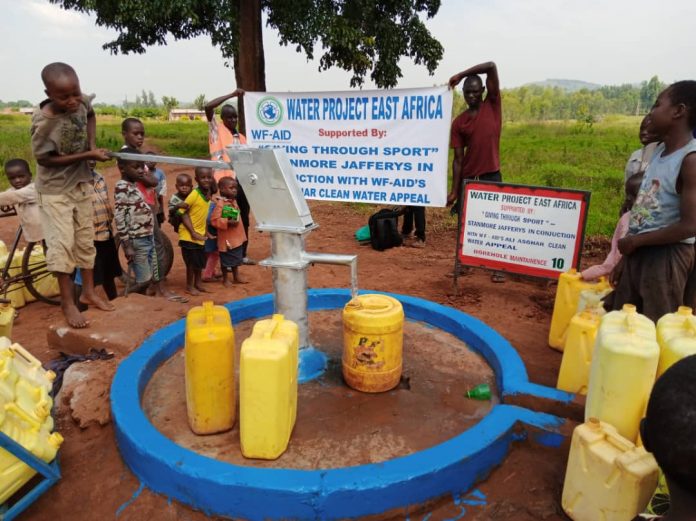 The 2019 L2B SJ Cycling campaign raised in excess of £31,000 towards WF AID humanitarian projects, to bring water to the most impoverished in the world.

Uganda was one of the destinations for the SJ Allocation, specifically Budaka and Butebo Districts in Eastern Region of Uganda.

Children have access to water for drinking in their schools

All ten boreholes that were identified in Budaka and Butebo Districts were repaired and renovated successfully, and are now serving entire communities. These communities were in desperate need of accessing water from neighbouring villages. Our intervention impacted greatly so that the communities can be self-sufficient, reduce acquiring lag (girls often fetched water two to three times a day, covering tens of miles) and can divert their attention to other activities.

Every $1 invested in water initiatives returns an average of $4 in increased productivity.

Three areas in Butebo District were selected, covering the villages of Kasupeta, Khatubayi and Puti, whilst two regions of Budaka District were chosen – namely Kaloja B and Bugwere. These villages have mosques, churches and primary schools within their vicinities yet found themselves within clean, safe water. In turn, this would maximise on the output of the HDW’s for the beneficiaries.

Beneficiary information for HDW’s in five villages (from two districts)

The HDW’s are fully functional and are readily providing safe, clean water to the aforementioned villages.

On average, the procurement time to acquire water has reduced from three hours to thirty minutes, making the project not only time-effective but also reduces the likelihood of injuries and risks being faced by women and girls who previously had to travel long  distances (often a few times a day) simply to obtain water, due to the gender roles playing in rural Ugandan society..

As a result, girls of primary-age now have time to concentrate on other productive activities, such as school and domestic work.

“An act of charity given openly prevents seventy types of

mishaps, and a secretly given

charity cools the anger of our Lord Allah (S.w.T.)”