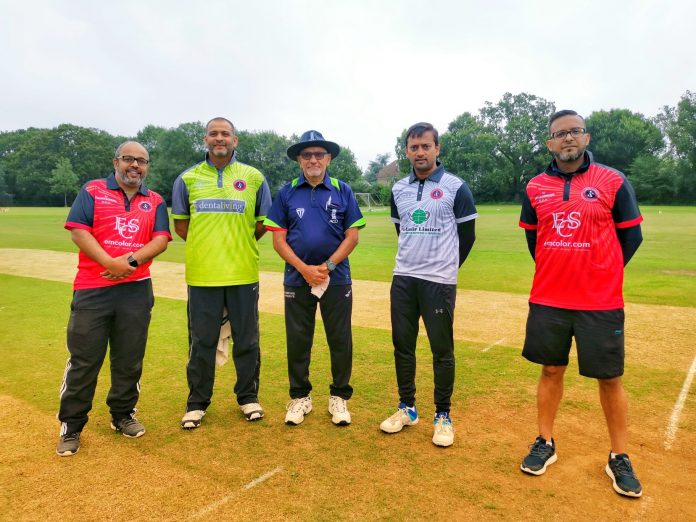 The cricket bonanza, held on Sunday 25 July, epitomised the spirit, camaraderie and goodwill that’s being reignited on the Cricket front.

The day started in an ominous fashion weather wise. The promised cloud cover, the drizzle, had one and all looking up to the skies hoping for some respite. Prayers duly answered, the tournament opened with recitation of the Quran by Sheikh Abbas Ismail. 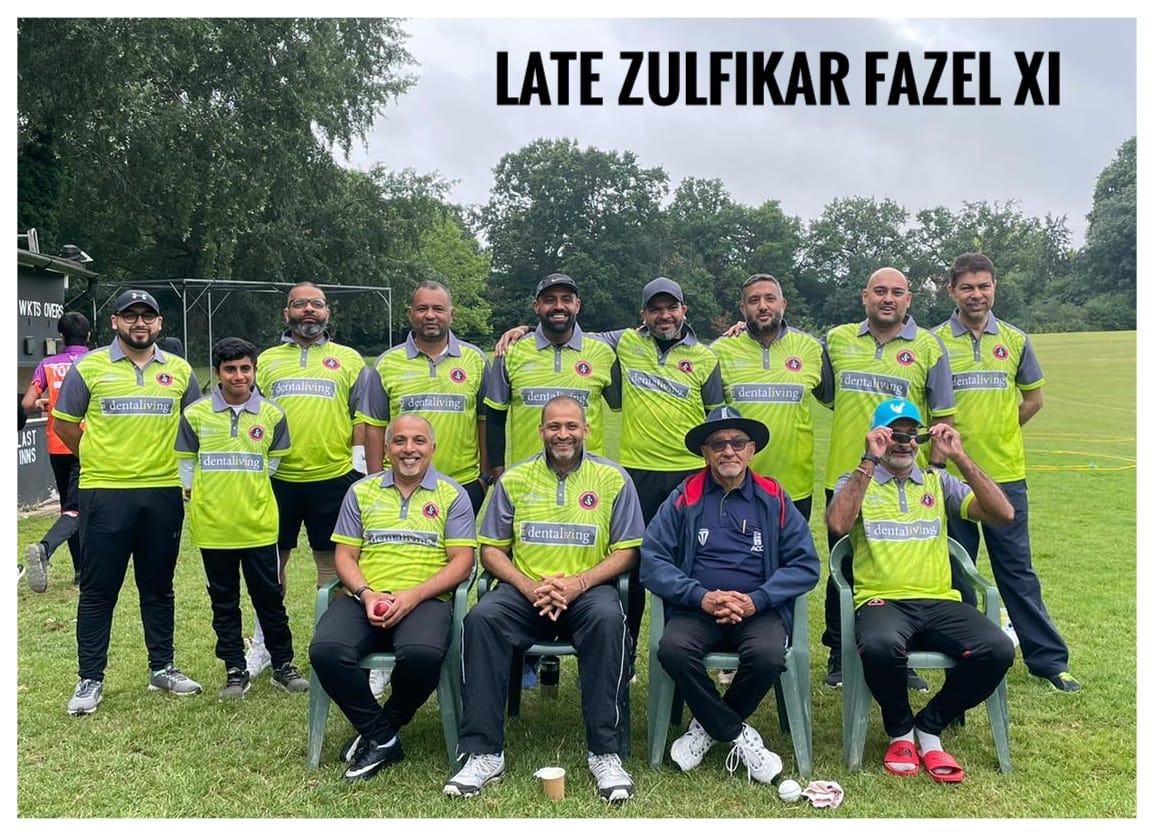 Marhum Shiraz Dharsi’s team however took a stranglehold on the game. Tight bowling and regular wickets kept the run-rate in check. Salman kept up his good form, only to be out-done by his father Zaffar cutting hard into the hands of point. After Zaffar had Imran Gulhamhusein bowled with 2 overs to go- the needed impetus wasn’t there- which left Marhum Zulfikar’s team under par with a score of 104 of their allotted 15 overs.

Sajjad Gulhamhusein started his spell like a man on fire, zipping the ball past the openers outside edge a number of times. This was going to be a tough chase if Mustafa and his charges kept up the intensity. Despite taking wickets, a few mishaps in the field and dropped catches cost Mustafa and his team in the end. Wasi entered the fray and played a superb captain’s knock. Smashing balls to all parts of the green – a notable highlight being a massive Six over long-on.

Needing 6 an over for the last 3 overs- Marhum Shiraz Dharsi’s team cruised to victory.

With time an issue, the next game was up and running in no time. 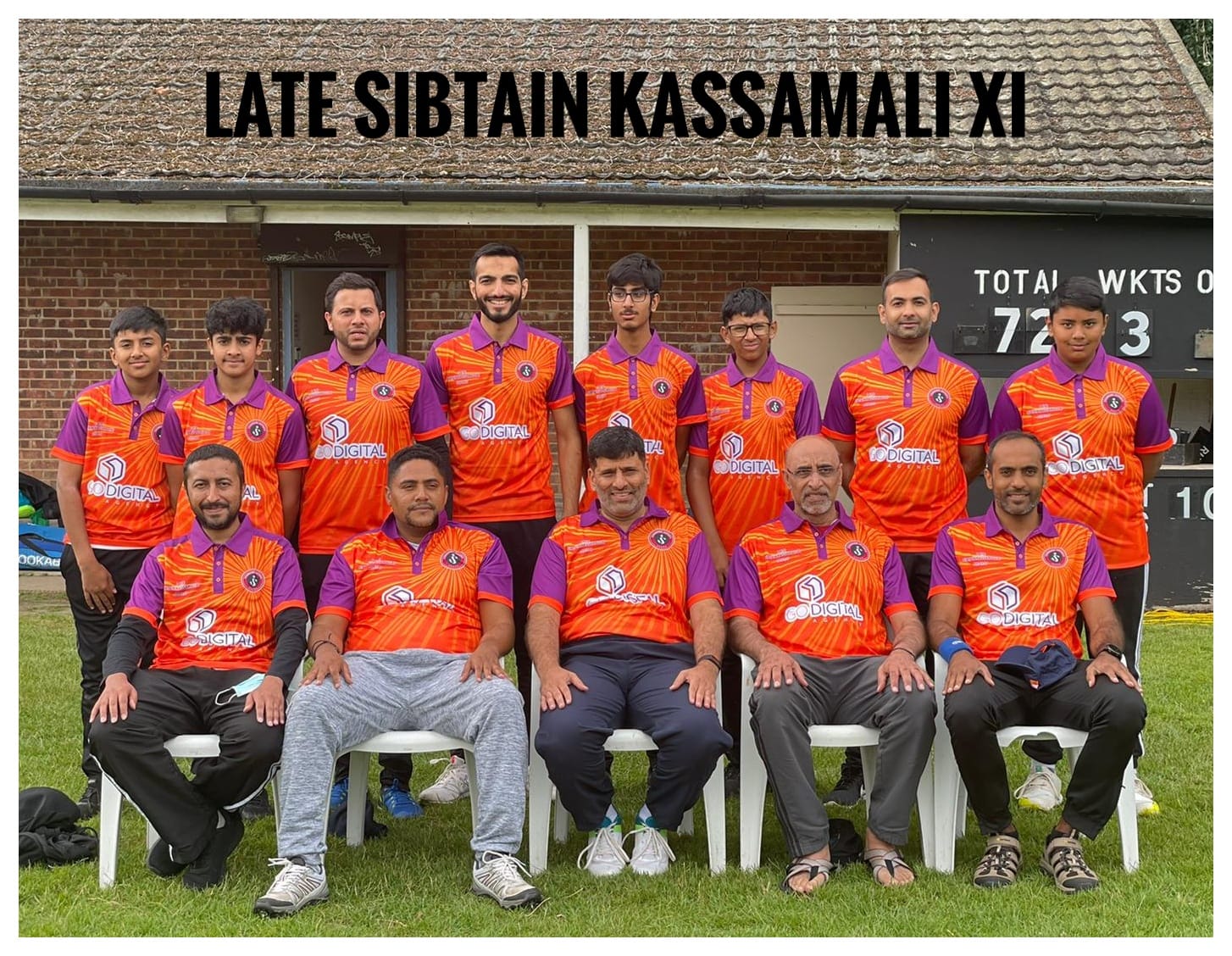 Sajjad Sumar had the daunting task of asking his team to set a score. Boasting SJ’s first choice opening partnership in Ammar Banadali and Salman Kassamali, Marhum Muslim Kanji’s team were looking to make a fast start. Imranali Khaki came steaming in with his electrifying pace. This was too much to handle not only for the batsmen, but for the keeper too. Despite not putting bat to ball much, the score was still moving at over 7 an over by over 6.

Then came the moment of the day. Munsif Kassamali bearing his legendary uncle’s name on his shirt came in to bowl his leg spin. His first ball trapped Salman Kassamali leg before wicket to the pure delight of the crowd, and especially his father, Qayyam who formed part of the tournament organising committee.

When Sajjad Sumar was unfortunately run-out in the next over, the innings looked to falter. Daanish Kanji entered the fray looking to accelerate representing his father, Marhum Muslim Kanji. He put two short balls away from Munsif. This attacking onslaught was short lived, as Munsif produced a false shot from Daanish where Sajjad Tejani took a great catch at cover.

Abbas Merali walked in, and brought real energy to the innings, running hard and pushing the fielders – he pulled the innings back on track eventually posting 141, after the 15 overs.

Sajjad Tejani had a huge task to get his team close to the mammoth total.

Sajjad Sumar opened the bowling with 13year old Ayaanali Kanji, and 14year old Ammarali Bandali. Both showed good pace and control. Despite the odd big hit from a short ball, the score was kept in check.

The pick of the bowlers however was Husayn Yahya Merali. His immaculate control of line and length was a joy to behold as he had the batsmen groping and prodding at deliveries – when their intent was to attack. The chase was never on, as the main batsmen for Marhum Sibtain’s team eventually scoring just over 100 and falling to a defeat.

The play of the day for this game was undoubtedly Munsif – who started off his SJ career with a wicket from ball one.

The tournament proceeded into Phase 2.

This game produced two moments of absolute genius. Mohamed Valjy (known to the football fraternity as Uncle Mo) produced a stunning bit of fielding, holding on to a steepling catch at mid-on. Not only was this a great catch – the celebration brought the crowd to his feet.  To describe it, think of a cross between Imran Tahir and Steven Gerrard celebrations and you get a picture.

Another superb bit of fielding in this game was Munsif (yes, him again) taking a superb catch in the deep. When asked about it, he described how he lost the white ball in the white clouds, then had to re-adjust his hands. It looked spectacular, after learning of the swift mental gymnastics that took place in order to snaffle the catch, one could appreciate what a great grab it was. 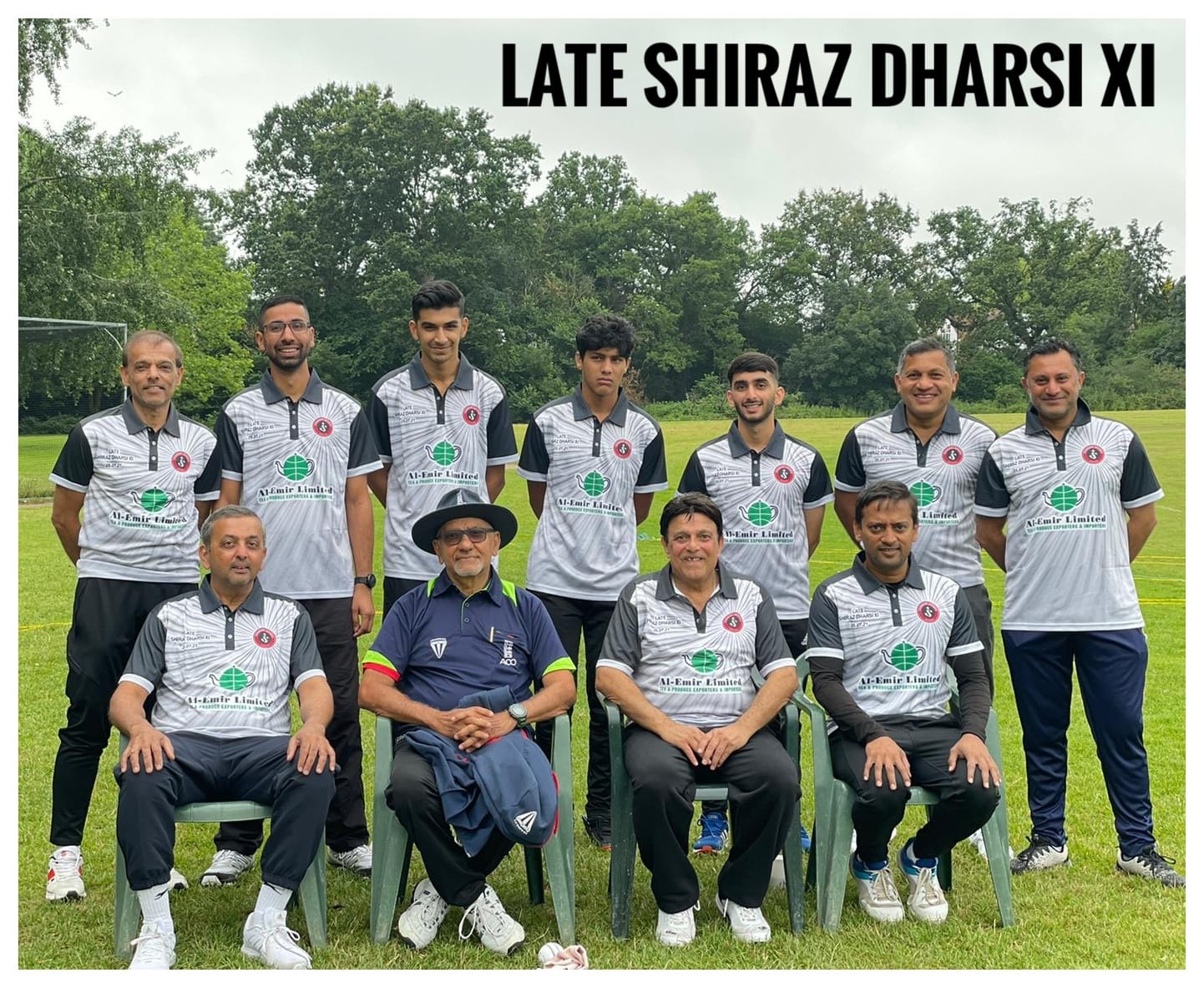 With the rain looming, the two captains who were playing out the 3rd/ 4th place match graciously offered to step aside and let the final take place. Despite their grace, the promised rain eventually fell. After 3 overs of the final, the game was eventually abandoned.

And so, a frustrating end to the day. However, the tournament was still a total success. The tournament had a friendly community feel to it with all participants making an impact somehow. The spirit that SJ cricket has within its group was shown clearly with the matches played competitively but respectfully.

All the Marhumin were honoured and remembered.

This however is not the end. The FINALS is scheduled to be played on the 29th of August. Details will be circulated in the coming week.

Mukhtar’s Dominate with Bat and Ball