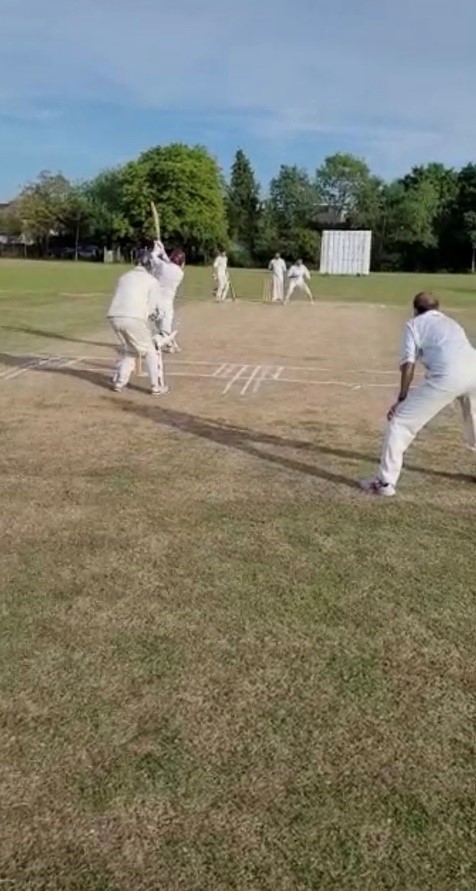 The match started with Team Sumar winning the toss and electing to bat. Drama from over one, Mulji stroked a Wasi Ali full toss through covers and set off assuming there was at least one run.

To everyone’s amazement, Azim went fully Jonty Rhodes, flung himself with a full length dive to his right, stopped the ball, then gathered and threw the ball at the keepers end. Musti AP whipped off the bails, and a vociferous appeal ensued with Mulji scampering back to safety.

Pressure on the umpire as he looked for a mix of DRS and VAR. With none available, benefit of the doubt went to the batsman, and Mulji survived.

Team Salman kept things tight and had Team Sumar two wickets down with not many on the board. Captain Sumar strode in, his customary Maroon helmet looking like a young Carl Hooper. Ably supported by Shiraz Jamal, the pair put on a fantastic partnership.

Sajjad particularly brutal against spin and slow medium bowling hitting a couple of massive sixes on his way to a well-made 50. Team Sumar ending on 156-6 off 20 overs.

Team Salman started their chase well after a hiccup first ball, losing the aggressive Zahid Jamal for a golden duck. Salman strode in to join Sibtain at the crease. The two were superb, running hard- using brute force against wayward deliveries, and super touch play to keep the run rate in check.

After losing Sibtain and Salman to the accurate bowling of Shabbir Mulji, Salman caught brilliantly by Syed Muzzamil in the deep, both half-centurions out, Team Salman needed to finish the innings.

In strode Wasi Ali, with 4 overs to go, his team needing 9 runs an over. The game was in the balance as the sun set on a wonderful summers evening. The teams traded blows, dot balls from Team Sumar punctuated by some boundaries-meant that the game went down to the wire.

12 runs, 1 over and the ball was thrown to Shane Merali, Head of Gents sport and Trustee.

The first went for 4, as Wasi hoicked it to midwicket. The second was a dot ball, 8 needed from 4 now.

The third did the damage, a superb hit from Wasi, six all the way. The game in the bag for team Salman, 2 needed from 3. Team Sumar though kept their heads up. A superb bit of fielding had Wasi Ali run out attempting a second run. 1 needed from 2 balls. Sajjad Tejani on strike, experience told as he got bat on ball and scampered a single with a giggling Musti AP his partner. Team Sumar’s fielders crestfallen after a heroic effort in the field.

A fitting end to a superb evening by SJ Cricket.

Man of The Match Sibtain Moledina