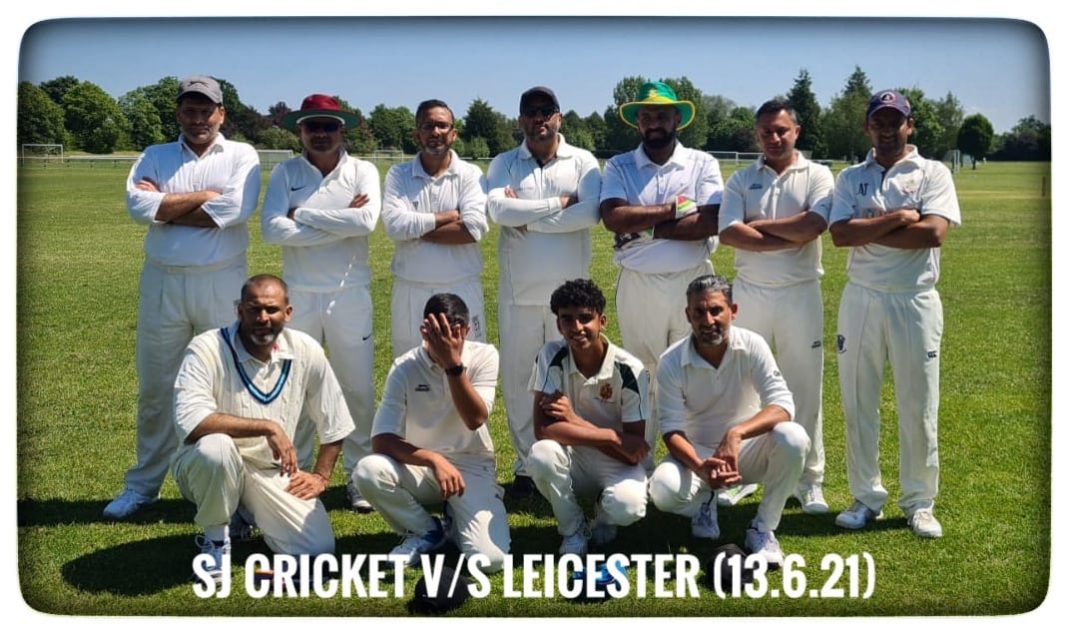 Like the internal game 2 weeks ago, SJ’s second match went down to the wire.

After winning the toss and putting Leicester in to bat, captain Mulji would have been forgiven for wondering whether his decision was right as Leicester made a solid start.

Ammarali Bandali (one of our own) and Adil took the game to SJ demonstrating their immense talent.
The dead grass, making the pitch true and a fast outfield meant runs flowed with ease.

Zahid and Wasi, despite all their efforts had a tough job to contain the runs.

Eventually, Wasi had their opener caught behind which brought Zainali Panjwani to the crease. He was ruthless with anything overpitched and cut and pulled short balls at will.

After 13 overs, Leicester were rollicking along smashing their way to 81. At that stage, a huge score was on the cards.
To their credit, SJ used the drinks interval to strategize to bring SJ back into it.

Sajjad Tejani’s guile and flight dried up the runs. Ammar, looking to carry on the barrage swept hard to deep midwicket straight to Wasi who took a superb low tumbling catch.

Sublo walked to the crease looking to add some more impetus to the Leicester score.

This wasn’t possible as Sajjad and Husayn Yahya spun a web that brought the run rate down.

Sajjad Tejani breached Sarfaraz’s defence bowling him and Husayn Yahya soon after had Zainali caught by Shabbir Mulji at long-on.

The conditions meant it was hard to contain the runs. Wasi returned for his 2nd spell, bowling a great line, and picked up 2 wickets. However, a few big overs and some dropped catches got Leicester to an imposing score off 205 off their allocated 35.

Imran Gulamhusein and Shabbir Mulji opened up for SJ, facing up to some nippy Leicester opening bowling.
After a solid stand, Shabbir was out caught, bringing Sajjad Tejani to the crease.

Sajjad brought a ruthlessness to the partnership with Imran. Stoic in defence and aggressive when Leicester made even a slight error. Both batsmen kept the run rate in hand, thus setting up SJ with the perfect platform to chase.
Alas, a tight LBW saw the end of Sajjad Tejani bringing Sajjad Sumar to the crease with the game in SJ’s hands.

Unfortunately, Imran and Sumar could not replicate their partnership of 2 weeks ago as Sumar was given out caught behind much to his bemusement. Sadly, there was no DRS which would have shown it clearly coming off his pads with his hand and bat nowhere near the ball.

Zafar walked in looking to steady the ship, with the run rate very manageable at this stage.
As expected, Zaffer continued where Sajjad left off, playing sensibly, whilst Imran doing his best impression of the great Dravid, with his defences firmly set and placing the ball into gaps and putting away the bad balls.

With the overs running out, Imran played one big shot too many and found Jameel Mukhtar in the deep to end his magnificent knock of 80. His innings was true masterclass in opening batting and lot of the younger generation should look at his innings as an example of how to score runs at a good rate in a risk free fashion.

Musti AP and Zaffar had the relatively easy task off scoring at a run a ball to see SJ home. However, nothing in cricket is given for free, and some tight overs increased the pressure, with Zaffar trying one shot too many and finding the fielder at long off.

Wasi joined AP and together they milked the singles and two’s. The match was now down to its dying embers.
As we approached the last over SJ needed 4 to get over the line. This was to be a test of temperament, and nerve.

However, hard running and placement into the gaps made sure SJ prevailed as the clock ticked past 8pm.
A great win against a tough opposition with familiar faces. The game was full of healthy banter and made for a great day out for the small crowd who turned up to watch.

Mukhtar’s Dominate with Bat and Ball