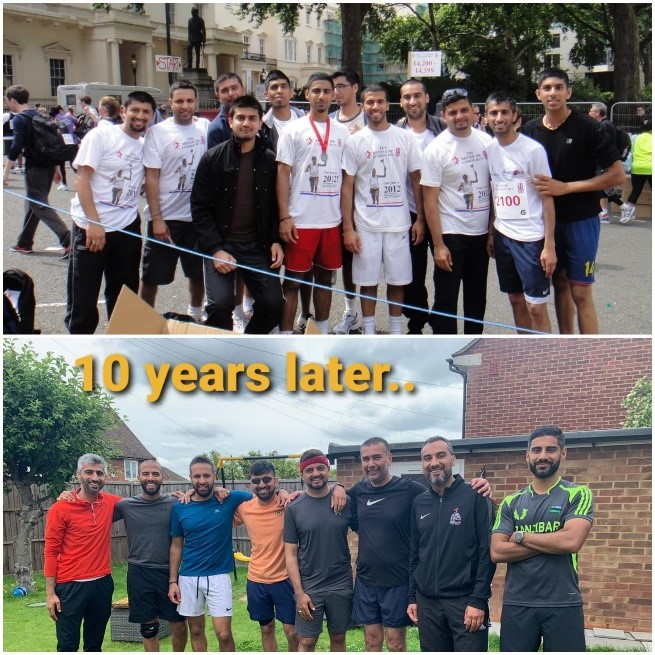 One of the things we are constantly reminded about at Stanmore Jafferys is the club’s rich history, from pictures of old games, to all time classic stories of our founding fathers and mothers. Preserving our history serves as an important reminder to ourselves of where we have come from, so we can understand how we have reached this position and therefore where we aspire to be.

Just under 10 years ago, 10 members of the SJ EC at the time decided to break new barriers in our community and undertake a 10km run to raise £10K. They were pushing boundaries within our community, thus allowing the rest of us to follow in years to come.

On 10 July 2021, SJ Running hosted a special run with breakfast and invited these runners back to reflect on that day and support our London Landmarks Half Marathon runners. Here we sit down with two of those founding fathers, Furquan Ismail and Ali Panju, and SJ Running’s Ali Momin, to talk to them about running back then, and now.

SJ: What would you sum up as the key differences between when you initiated the 10K run and the run today?

Furquan: The monumental difference from 10 years ago to today is the shear momentum and interest in running. In those days we were literally searching far and wide for runners. Today, alhumdullah, we have so many members that are not just running 10km but pushing their personal boundaries to reach half marathons and beyond. This has not happened on its own, SJ Running, have created that positive ‘can-do together’ environment and built on the collective energy.

SJ: What was the reaction of those in the community to when you completed the 10K all those years ago?

Furquan: Interestingly, I think people were a bit shocked. Running was not something we did in the community, and 10km was not considered ‘do-able’. It’s funny when you think about that, because today we just did a casual 15+km run. I think bringing running into the community, especially with the likes of Mo Rahim and others, showed what the ‘art’ of the possible was. This followed by SJ Running initiatives showed that this ‘art’ was not limited to the few but the many.

Ali Panju: There was no real interest in running within the community then. No-one understood running or the effort that was required, or what 10k was. A few guys turned up for a run having never “run” before — just great athletes taking on a challenge.

SJ: How has running as a sport and fitness activity changed since you were involved all those years ago?

Ali Panju: SJ as a club has changed massively. over the past 6 years, the club has refocussed on sports as the main focus (having previously engaged in literary, social, relief and even business arms) and has seen the membership mushroom. The engagement of sisters into the club and a now thriving sister section has also been noticeable. The organisation and inclusion of younger kids into the club has capped the full spectrum of membership. With this growth in participation comes the growth of the variety of sports; table tennis as an example was only ever played in MAMT by a few enthusiasts, but now we have coaching weekly for kids, tennis, swimming and cycling. Fitness and Running have also found their place, with community members coming together for previously niche sports or activities now finding a home.

SJ: What are your reflections when you hear about running in our community back then and now?

Ali Momin: One of things we’ve always recognised is that running in our community existed long before SJ Running was founded last year. There are two main things we have done since we have come along. Firstly, started to remove the barriers that have traditionally existed in running for people in our community so that it becomes more accessible. Secondly to provide a support mechanism so people are guided along their journey. One of the beauties of running lies in its simplicity, anyone can do it whenever they want to. But with that comes the challenge that it is also easy to not do or stop doing at the first sign of trouble. These guys pushed the boundaries of what was achievable then. Our message to anyone who is contemplating taking up running: “Push your boundaries, we will support you each step of way, and who knows what you might achieve.”