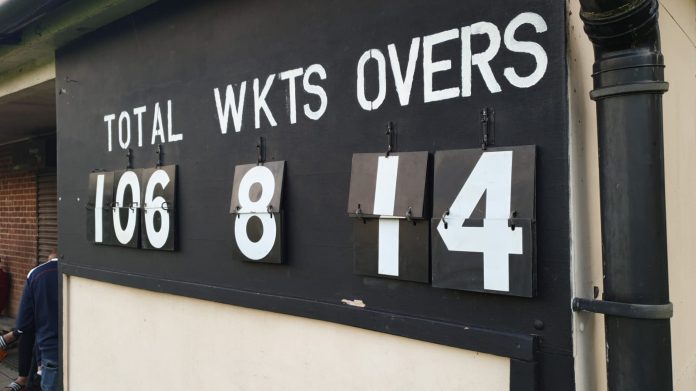 After a long build up and incredible interest, SJ’s mini tournament got underway with Team B (Led by AP) lining up against Team D (led by Imran GH)

Sibtain Moledina and Salman Kassamali opened the batting for team D getting the team off to an absolute flyer.

Salman was ruthless with anything slightly loose smashing the ball square on the legside at will.

Team B under pressure brought on Husayn Yahya to stem the tide with his offspin.

This proved a masterstroke tying Salman down. Wasim Karim took a stunning catch behind the wicket off Salman’s under edge to give Team D their first wicket.

The big outfield and hard running meant the score was racing along at over 9 runs per over.

Imranali Khaki brought some fire to the attack beating the bat on a few occasions.

Zahid Jamal, Imran and Sibtain carried on the free scoring posting an imposing 118 off their allocated 15 overs.

Team B started in shaky fashion. Shams being run out in over 1 with not much on the board.

This brought the much awaited return of Kumail Khaki to the SJ cricket fold to join Ozzie at the crease. His first scoring shot was a six sweeping a full toss to deep square leg.

Ozzie and Kumail used all their nous to keep the scoreboard ticking and finding the odd boundary.

A marginal LBW saw the end of Kumail’s innings. Ozzie and Wasim Karim kept the run rate in hand with sensible cricket.

Imran played his trump card bringing Ali Ismail aged 13yrs old to bowl. His tidy line and length was very tough to get away and increased the required run rate.

Ozzie and Wasim had to get on with it, both perishing trying to find the boundary.

AP trying to push the singles lost his wicket by arguably the play of the day. Ali Ismail fielding at short third man picked up the ball clean and threw down the stumps. Direct hit and the game was in team D’s hands.

Zahid Jamal picked up 2 wickets in his last over, with Muntazir Bhimji and Abbas Merali taking super catches in the deep.

Husayn Yahya came to the crease with fire in his belly. Along with Sibtain Alibhai (ably helped by AJJ as his runner) took the game to the wire.

13 needed off the final over, the tension was palpable. Aided by wayward bowling and a magnificent legside flick for 4, Husayn Yahya showed a maturity beyond his years to bring home a remarkable win for his team with a ball to spare .

Men of the match.

Husayn Yahya for his bowling and batting at the death

Ali Ismail, for his tidy bowling spell and magnificent run out.

The next instalment to take place on Friday 2nd July.

SJ Cricket back on the field