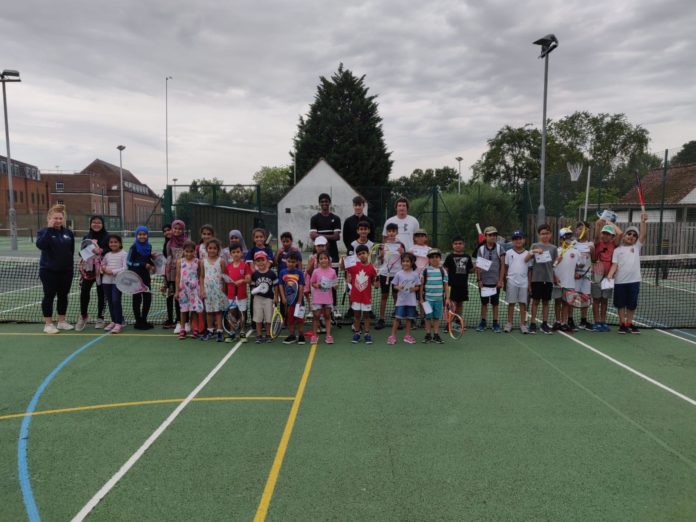 After a successful SJRS Festival of Rackets., the Boys and Girls were treated to the 5th edition of the SJRS summer tennis camp this week taking place at the impressive facilities of St Helens School in Northwood. This camp was the second in a series of three camps that SJRS have been excited to offer:
– SJRS squash camp in half term in February
– SJRS summer table tennis camp in August

The kids were coached under by the SJRS Head Tennis Coach Richard Sutton and his dedicated team. The Boys and Girls have thoroughly enjoyed themselves.

The heat wave proved challenging but we were able to secure the indoor sports hall for the younger age groups as a safety measure and for the comfort of the kids.

These camps are only possible with the continued support of parent helpers who helped with registrations and ensured all kids were safe. To the 20 volunteers over the week, we say a massive thank you and look forward to their continued support in future years.
SJRS Chair Abbasali Merali commented ‘It is a pleasure to see so many boys and girls get inspired by our summer camps to take up this great game and come through the system. I can recall some of the winners at this year’s SJRS Festival who had their first taster of tennis at previous summer camps. A big thank you to our Boys Tennis Coordinator Jamil Merali for his outstanding organisation of the summer camp together with the help of SJRS Ladies and the team of fantastic volunteers.