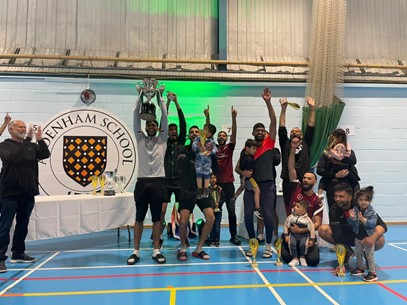 There’s something about the galvanising effect of volleyball and its ability to bring this entire community together. As our heritage sport, Volleyball’s ability to capture the Khoja imagination in the sporting sense is unrivalled. As the analytics are leafed through and the numbers crunched, viewing figures sit at around the 65,000 mark over the four days, with over 15,000 unique views tuning in for the championship and premiership finals on Sunday 05 June.

As the cries of ‘We love you, Fazal, we do’ & ‘O Fazal Virani’ rung out at a capacity attended Aldenham School at 8:30pm last Sunday, players from Stanmore A were about to enter SJ folklore. Defeating, the much heralded Toronto Jafferys team in straight games, 9-9 (Stanmore A service) and 15-4. And so, the names Mehdi Gulamhussein, AP, Murtaza Merali, Amirali Merali, Abbasali Merali, Kumail Khaki, Khalil Khaki, Fazle Mohamedali, Mujtaba Jaffer and Imranali Khaki etch into our collective hearts. Stanmore A exhibited world class tournament volleyball, pacing themselves through the group stages and astutely negotiating the knockout phases to get into the final at the top of their game. The side will eventually look back at the events of last week and realise their clinical edge, gracefulness in performance and ultimately, the ease with which they dispatched the most decorated side in Khoja volleyball. Accolades also for the valiant efforts of Stanmore C, a team set up almost as a Fazal Virani memorial, who fought their way to the Championship final, ultimately defeated by Husseini All Stars of Leicester.

In terms of organisation and especially coverage, the Al-Wilayah Cup will go down as the benchmark for tournament processes, with administration, officiating and guidelines all clearly marked out. However, it was the online livestream, studio coverage and the multiple camera angles that really stole the show. Never before has Khoja Volleyball been presented in this way. With viewers able to forensically dissect the performances of the stars on court, carefully steered by the dedicated presenter team and interviews with members of the global volleyball fraternity as well as tournament players.

It would be remiss at this point to not celebrate also what has been achieved for Stanmore Jafferys generally. The club has achieved their vision, as set out by the Chair, Shaneabbas Merali, of a Stanmore team that reigns supreme in the global volleyball fraternity, aided by the phenomenal effort of the Volleyball Team led by Jabir Merali and supported by Tauseef Kanji together with the Al Wilayah Organising team, whose operation was surgically precise and will be credited as the team that brought VAR and another piece of major silverware to the club. Acknowledgment also to all our wonderful sponsors and also our supporters. The community truly dug deep, hitting every ball, cheering every point. Without this fervent support, our success would not have been achieved or been half as enjoyable.