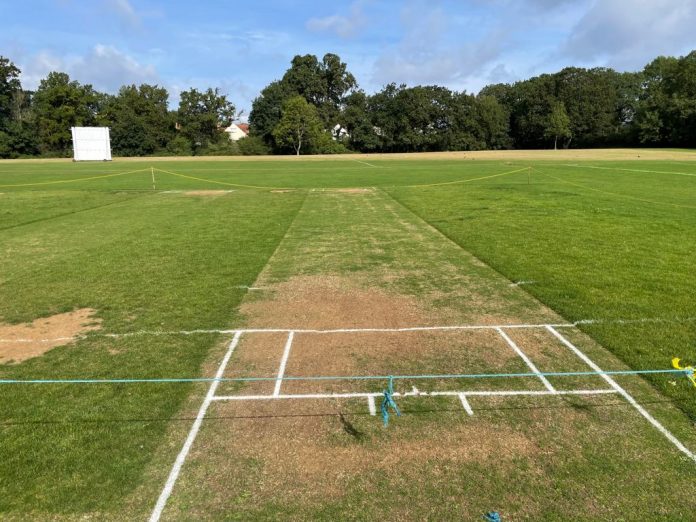 Sat 11th September gave us an insight into the future of cricket within our community. Two of our brightest prospects were given the opportunity to use their experiences over the course of the season to lead their respective teams.

Both teams were well balanced on paper however Salman’s spitfires got off to the worst possible start. In the second over, new recruit Sadiq got through Asad Abdullah’s defence to bowl him, and two balls later a flashing edge from Abbas Fazal was expertly held at first slip by Captain Husayn Yahya.

The Spitfires needed some consolidation and had the perfect man for the job. Shabbir Mulji joined Salman at the crease and together they rebuilt the innings pushing the score up to 57.

Husayn Yahya demonstrated that not only was he a good captain, he has what all captains need – Luck, by having Salman caught of a full toss off a leaning edge, the ball spooned up to cover where another youngster Husayn Ismail took a good catch

Tauseef joined Mulji at the crease, putting together a 50 run partnership to keep the momentum going, Mulji batting brilliantly, dominated the partnership smacking the ball to all parts of the ground.

HY called upon Zaffar who began spinning a web coupled with Sadiq from the other end who was back swinging the ball round corners- the Spitfires hit a bit of a rut. Trying to accelerate the scoring, Tauseef made the cardinal mistake of stepping out to Zaffar allowing keeper Sibtain to take the ball one handed and whipping off the bails and get him out stumped.

At 111-4 in the 22nd over, the Spitfires needed to keep the scoring rate up. Enter Shiraz Jamal – who has admitted in the past that he models his style on his childhood idol Javed Miandad – played two sumptuous shots off Zaffar and built another solid partnership with Shabbir.

The momentum shifted however, with an unfortunate run-out seeing the end of a super knock by Shabbir Mulji for 48. A sad end to a brilliant innings!

Wickets quickly fell for the Spitfires, most notably Husayn Yahya bowling Wasi Ali through the gate for a first ball duck.

Shiraz had a tough job, scoring runs and nursing the tail to ensure his team posted a good score. He found able support in Ali Mahdi Ismail who proved a good foil for the swashbuckling Shiraz who carried on his great form finding the boundary at least once an over. Ali Mahdi then played arguably the shot of the match, leaning on a cover drive with the ball racing along the floor all the way to the boundary.

Some lusty hitting from the Spitfires lower order, including a smashing square hoik from Akil Bandali off Zaffar enabled the spitfires to post a respectable and on par score of 183 -all out, losing Shiraz last in the 35th over. His 43 runs and ability to shepherd the tail home was invaluable.

The pick of the bowlers for the Hurricanes were Sadiq, Zaffar and Zeeshan.

The Hurricanes innings started in storming fashion. Mehboob Gulhamhusein and captain Husayn came out with an aggressive mindset, no doubt influenced by the exploits of Zaffar from his superb innings in Dubai which he was articulating repeatedly during the Tea interval

Very quick singles and lots of pressure on the bowlers meant the Hurricanes got off to a flyer. Hasnain Khimji (the Spitfires overseas pro) bowling accurate medium pace however got Mehboob out caught by Salman in the covers.

Next over saw a moment of controversy. Wasi Ali Breaching Husayn Yahya’s defences. The Spitfires all went up appealing for a catch as the ball deflected to second slip. The umpire gave the batsman out, but not for the catch- but instead LBW.

The spitfires needed this bit of luck as the run-rate was at almost 6 an over, with wayward bowling down the leg side the main culprit.

Zeeshan and Sadiq got together to build the run-chase. They played patiently putting away the bad balls that the Spitfires served up. The score after 15 overs – 86-2. Hurricanes needing less than 5 runs an over- the Spitfires needed some inspiration.

Step forward Abbas Fazal who coaxed an error out of Sadiq to spoon a catch to the waiting Wasi at mid-on. Imran Khimji joined Zeeshan, who were now facing the guile of Shabbir Mulji and his slow left arm spin.

The runs dried up, until Imran rivalled Ali Mahdi for the shot of the day leaning on an over-pitched ball by Shabbir and easing the ball to the boundary for 4. Shabbir however was to have the last laugh enticing Imran forward and beating his outside edge – keeper Ozzie doing the rest and whipping off the bails. The crowd gathered mentioned that the dismissal reminded them of Adam Parore whipping of the bails to the bowling of a certain Danny Vetorri, high praise indeed!!

Zeeshan carried on his good work with the bat applying the pressure on the Spitfires bowling. He was now joined by the seasoned Sibtain Moledina. The wickets that the Spitfires needed were starting to come courtesy of Shabbir, who beat Zeeshan in flight and got him LBW. Mulji was on fire!!

Shiraz Jamal then ran out Husayn Ismail with a direct hit and suddenly the Hurricanes had something to worry about being 114-6 in the 20th over.

The vast crowd had one question! Where was SJ’s Mr Cricket. With Zahid and Zaffar yet to bat, the game looked like it was going down to the wire.

Sibtain held one end up, but the wickets kept tumbling the other end. Mohib KG was stumped, and after a small partnership, Syed Ali was caught and bowled of Wasi.

Enter Zahid- who has shown this season how dynamic he can be with the bat. Unfortunately trying to ease the run pressure he misjudged a great ball by Wasi who got Zahid bowled.

Stage set- his team 158-9, Zaffar strode out confidently to join Sibtain- who by know was compiling a super innings. Older spectators at the ground remembered the time when Madan Lal walked to the crease during a Ranji Trophy match!!

Wasi was now in full flight, steaming in- first ball to Zaffar hit him on the pads. A loud appeal ensued- the fielding team crestfallen as the umpire said Not Out.

Sibtain and Zaffar needing 4 runs an over were in self-preservation mode, not playing a shot in anger and looking to pick of singles to get their team home.

At the beginning of the 31st over, the Hurricanes had mustered 181-9. Wasi Ali in his last over, this was make or break.

Salman brough all the fielders in on the single ensuring that if the Hurricanes were to win it, they would have to hit a good shot to pierce the infield.

Wasi bounded in, bowled a fast yorker to Sibtain, who missed the ball and it clattered on to the stumps. The Spitfires roared in celebration as they pulled off an unlikely win.

The game was again played in a wholesome community spirit, with notable performances from

The MOM for his 48 and 3 wickets was Shabbir Mulji. A true all-round performance.

Team A secure spot in the Finals