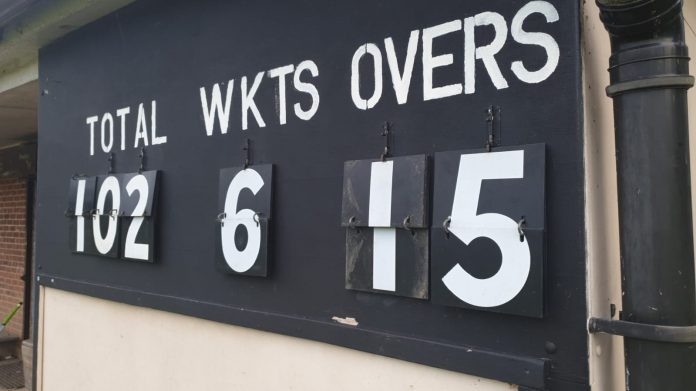 SJ Crickets second instalment of the mid-week tournament saw Mulji and his Team C, take on Team A.

Team A were reeling from the late withdrawal of their captain and had called up Shane Merali to lead the team.

Mulji won the toss and put the reds of Team A into bat. The innings got off to a slow start by modern day standards with the run rate falling below the run a ball average, with Team A limping to 47-2 after 10 overs.

With just 5 overs to go, Salman Mukhtar took the innings by the scruff of the neck, belting the ball to all parts. He may be diminutive in stature, but boy does he pack a punch. Taking 20 runs off over 11, and 11 off the next (which was delivered by none other than his dad Zaffar).

The acceleration was not only down to big hitting, but also assisted by aggressive running, turning ones into twos and twos into threes.

Team A posted a respectable 104 off their allotted 15 overs. With 60 runs coming off the final 5 overs helped by Zahid Jamal belting out a few meaty blows at the death.

Team C started their chase in steady fashion. Fayyaz and Sajjad milking singles and putting the bad balls away to the boundary. A steady 6 runs an over off the first 4 overs kept Team A on the back foot and under pressure.

The game turned on its head when captain Shane brought himself on to bowl. His accurate bowling pushed the Team C batsmen to take risks as the required run rate started climbing and he grabbed two quick wickets in succession. Fayyaz bowled comprehensively, Zaffar Caught and Bowled for a duck and Team A were back in the game.

In the very next over Sajjad Tejani arguably pulled off the play of the day. Plucking the ball out of the air in a full stretch dive (off the bowling of Shiraz Jamal) that had the well set Sajjad Panju take the slow walk back to the pavilion. The applause and acclaim from the crowd was a testament not only to Sajjad’s innings but also to a great piece of fielding. The word Jonty was brandished around!

Wasi came in and struck a few meaty blows to the boundary including a towering six, however in the very next over Wasi was stumped off the bowling of Shane to level things up yet again.

A few big blows by Bhimji meant Team C needed 7 off the last over.

Shane turned to the experience of Sajjad Tejani to bowl the crunch over. A few dot balls, and super fielding meant Team C could only muster four runs in thee last over.

The match saw some superb cricket.

Shabbir Mulji’s two catches, one a hard-hit pull shot and the other a crucial catch in the deep to dismiss Salman.

Imran Karawali showed great promise with his rhythmical action. MohamedMehdi Tommy was accurate and miserly with his line and length. Yet two more gems unearthed for SJ.

The future is bright for SJ with the emergence of an 11 consisting of under 18s through this season who can all play at a high level and give the adults a run for their money.

The names below are the future of SJ cricket. We are blessed to have these and look forward to finding more talent.

Man of the Match:

Shane Merali pushed Salman all the way to take this accolade, but we cannot deny that Salman’s batting was the ultimate difference between the two teams.

Congratulations to both teams on putting up a great display. It was also heartening to see a great crowd at the Match and Inshallah we will see you all at the next two cricket fixtures:

Both the above will take place at Clonard Way in Hatch End.