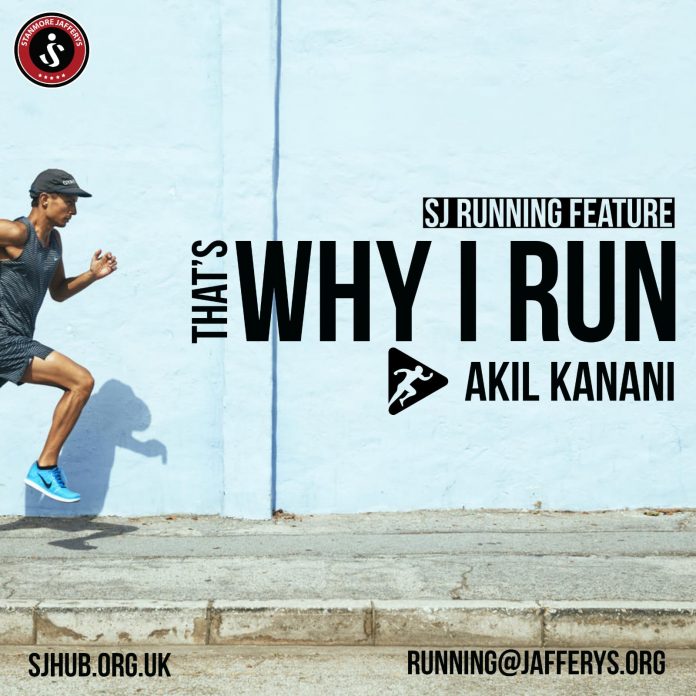 I’m Akil Kanani, an Optometrist by profession working in both the NHS and private sectors. I’ve been involved in community service since my early teens serving in various capacities. I’ve even served on the SJ board as secretary and vice-chair around 15 odd years ago when SJ was in its infancy and we were just about getting ourselves structurally organised. More recently, I have been a regular at SJ fitness on Sundays and really looking forward to starting those weekly sessions again when lockdown eases! 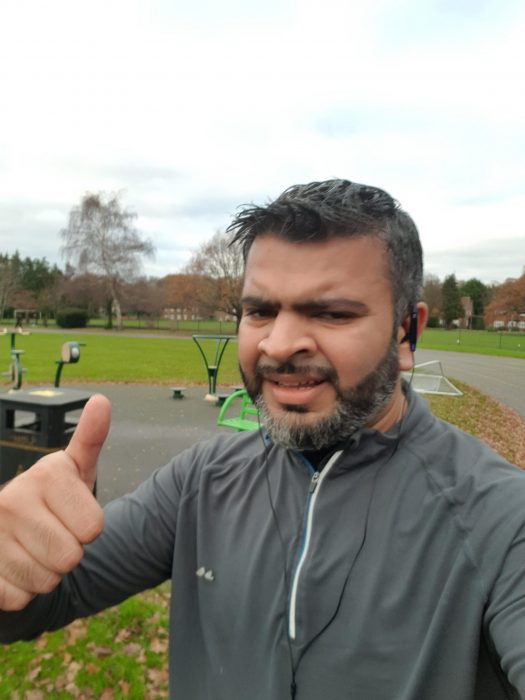 As a teenager I hated running. In fact apart from 100m sprints, anything longer I resented. During cross country, I would be right at the back of the pack. Fast forward 23 odd years and in 2018, Mahmood Mawjee messaged me to say come and join me at Cassiobury park and let’s run together. I clearly remember it was Easter weekend and together we managed to run around 2-3km with some walking breaks in between. I clearly underestimated myself but as with all things, the buzz died out very quickly. In January 2019, I started a 12-week course with ManAlive to generally improve my fitness and lose some weight. At the same time, I downloaded the “couch to 5k” app and on my non-training days, I started running on my indoor treadmill. I recommend anyone setting out to follow the app to the T. 8 months later, in August 2019, I completed my first park run. Since then, I tried to attend park run at Cassiobury park every weekend I wasn’t at work. To date, I have managed to complete 20 park runs and hoping to commence again when it reopens!

To be honest, running isn’t very enjoyable during but rewarding at the end. My philosophy right from the beginning was that whenever I run, I should aim to complete the run without any stops. Even if that meant a drop in pace and slower time. And I have been blessed that whenever I’ve set out, park run or road run, I’ve always ensured that I complete the distance intended without stopping. So the enjoyment actually comes at the end of the run when I feel thankful to the Almighty for giving me the strength and endurance to complete what I started out to achieve.

I think there are two that stand out the most. First was to complete my first park run of 5km with no stops at my first attempt back in August 2019. Secondly, was obtaining my PB at the Ruislip running track at the back end of last year knocking nearly 2 minutes off my average.

Firstly believe in yourself. You CAN do it. Start off with a coach or a running app. You’re not going to run 5km straight away. It takes regular training and building up the distance. Secondly, try and be consistent. Don’t overdo it. Time and pace is all secondary. Yes, we all want to get PBs but every run won’t be for that PB. Thirdly, for those who can, join Strava. Nothing beats a little bit of motivation and competition. For me, I take inspiration from colleagues who I see run phenomenal distance and pace. Fourthly, set yourself targets. The recent SJ challenges have really helped me plan my week.

Start slow and build up. We have so many experienced runners in our community. Reach out to them. Buddy up with someone who can push you just that little bit. For me, it was Mahmood who made me believe that I could run. I just had to believe in myself. Even if it’s short distances to begin with, don’t feel embarrassed. I am not the fastest nor am I clocking hundreds of miles per week. I just try and maintain some consistency and weekly, I share my experiences on social media so that someone out there may take some inspiration and also get out. Our health is one of the greatest assets we have – let’s make sure we take good care of it. Whatever form of activity we do, be it running, cycling or team sports, ensure we do it regularly and consistently.

Afzal Pradhan – A Volunteer in perspective – Volunteering in focus