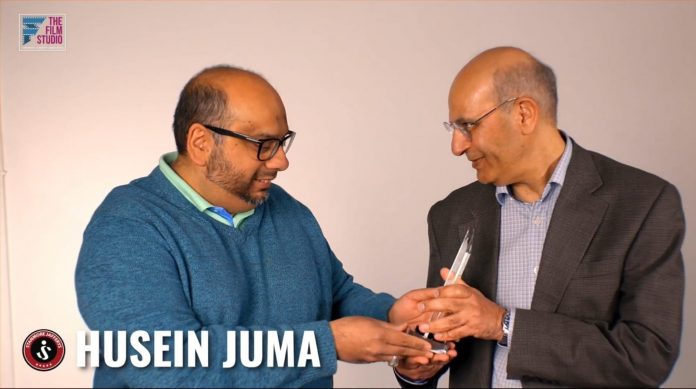 An evening chat with Hussein Juma waltzes by as we speak to celebrate Stanmore Jafferys inaugural Outstanding Contribution award. Synonymous with table tennis, it quickly becomes clear that his passion in fact lies elsewhere, in the arms of another, more regal pursuit. The sport of kings, if you will. As we reel of many a merry yarn, charting Hussein’s journey from Uganda and competing at the local YMCA, to playing under the stewardship of Arthur Ashe and Stan Smith in the USA, to tournament tennis at some of the UK’s most prestigious clubs, I find an individual of tremendous interest. Considered and reasonable in approach, and yet with enough about him to realise the real romance is in passing it on.

The raison d’etre of Hussein’s dedication in sports is competitiveness. There’s such spirit in his voice when he notes the addiction of doing something competitively and how the challenge is not one that is merely physical. The mental aspect can be just as consuming: ‘My daughter once asked me if winning is everything in sport. It’s a profoundly perplexing question which took me by surprise. On the flip side you might have the primary aim of enjoyment. For me the fun is in winning and the mental gymnastics that take place in-game as you try to work out an opponent’s weaknesses and subsequently exploit them if you have the required ability to’. There’s pride too in seeing the fruit of his labour. ‘We had the winning chat after a table tennis match that we had narrowly lost. A couple of weeks later, my daughter was playing in a tournament against an opponent ranked 20 places above her in the national standings. And won! She had mastered how to play the chop serve and service return (a shot which only my generation can play and which no longer features in the modern top spin game) and unsurprisingly her opponent’s shots were landing in the net because she had not encountered that shot before. At the end of the match her opponent was in tears’. There’s almost a begrudging respect as Hussein mentions this and it’s clear he’s not bringing up the crying as a boast. ‘In a way, I admired the way she responded. If you lose when you think you’re going to win, it has to hurt. If it doesn’t, you will never be a great player’.

As the conversation drifts to the SJ award, there’s a courteous humility which is rather bemusing. To be sure, Hussein is very honoured to be selected but asserts that ‘age was a determining factor’. Indeed, he is full of praise for sister Saida Nasser, who was also awarded the Outstanding Contribution on the SJ Ladies side. ‘She’s someone who’s been there since Day 1, at the nucleus and continues to remain fully committed which is truly admirable. There’s many more like her at SJ on the men’s side who are more deserving for the award. Hence, I suspect that my age definitely had an impact.’ Hussein is also full of praise for the way in which SJ is thinking big and its progressive ethos. ‘The operation is slick, and forward thinking not by-the-by or functional. It has captured the imagination of our community’ he states. The vision can be even grander. ‘I am so very proud of Ali Habib. That has to be the aim at SJ. We have to see kids transition from the grassroots to clubs, county level and why not national or global heroes?’

I’m struck by how things might have been significantly different had Hussein’s father had his way. As a 13 year old, the young Hussein was selected by the Ugandan YMCA to represent Uganda sports in an overseas trip to the USA. He trained at a camp where greats of the game, Arthur Ashe and Stan Smith were providing coaching. ‘I was pit against a 15 year old by Ashe on my first day. This guy had been professionally coached all his life. So a baptism of fire to be honest. They wanted to see how I would fare against the same player on my final day to assess the progress I’d made’. Hussein duly lost the first match 6/0, 6/0. To everyone’s surprise, the plucky underdog who Ashe had nick named Simba won the rematch on his final day at the camp in three sets. ‘I went into the match with a clear strategy which was to frustrate his power-based game. I had immense stamina and could go on all day, so ensured rallies were long. Slowly, I could see him getting more and more frustrated. To him, it was just another match, but to me it was my only opportunity to get my revenge and to demonstrate to Ashe how much I had improved in 4 days training.’ There were also motivating words from Ashe at the end of the match. ‘What you did was amazing! You worked out a strategy which makes you a smart player’. There was a subsequent promise of an offer of a Tennis scholarship to a US college. ‘On his way back from South Africa, Arthur Ashe stopped in Uganda. He remembered me and made the offer to my parents. I wanted to go and my dad was ready to sign on the dotted line. But my mother had the final word, ”he needs to study”. Study is what I did and eventually took to law and the rest is history. There’s no regrets because I feel that despite the demands of my busy legal practice, I was able to play tennis at a fairly competitive level, albeit, as an amateur.’

The value of sport and in tennis for Hussein specifically, is how much the game has given back. ‘On court, you’re just another tennis player. And that’s how I think I was seen. There’s no superfluous baggage. From the day I started playing tennis, my life changed. No exaggeration! The game has completely transformed the way I think and widened my experience of society in the UK. When my mentor, Ashe played tennis everyone noticed his grace, beauty and humility. Every time I go on court (apart from winning of course) those are the three qualities I strive to achieve. When I overhear someone say, isn’t that a beautiful volleying technique, I feel that in some small way, I am carrying on the legacy of my mentor which is a wonderful feeling.’

At least the first 10 years of tournament tennis at MAMT as well as kids coaching at Aldenham were led by Hussein and his sons. For this, as well as the ongoing table tennis coaching, we at SJ owe Hussein a debt of gratitude and pray that Allah (swt) rewards him amply for his efforts.