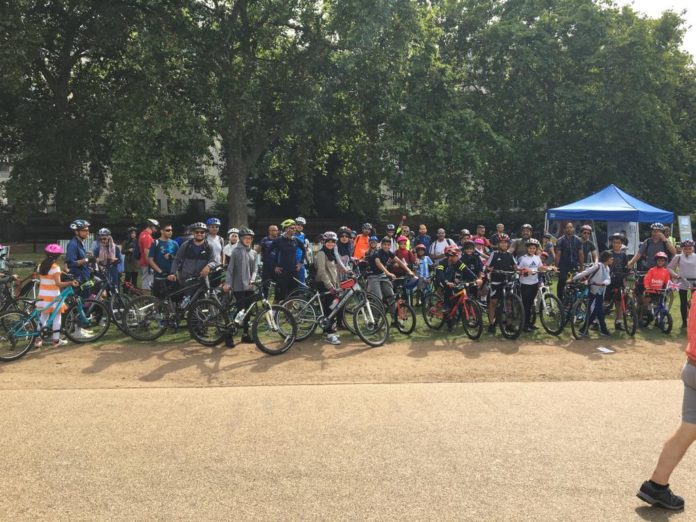 It was 7 o’clock on a Saturday in the summer holidays (that’s a.m), I should have been fast asleep, but I wasn’t unfortunately. I was struggling to wake up and in 10 minutes, I was meant to leave home for a day of cycling. My brother, my dad and I were going with Stanmore Jafferys (SJ) to cycle in Prudential London’s Free Cycle.

We were all excited for the day however we were all extremely tired (despite waking up an hour later then we’d planned). We had missed the train we intended to catch and then missed the next one because my brother had forgotten his helmet, which had actually been taken by my dad who had left his behind – boys!

Despite the problems we managed to cycle to the station in time to catch the next train. We got off at Kenton Station and then cycled to meet the rest the of SJ. They were loading the bikes into a truck and then taking the train. My dad and brother had signed up to ride London to Brighton with SJ cycling so for practice they and some friends planned to cycle the 12 mile journey from Northwick Park to Green Park instead of taking the train. And of course, I had to join them. (Though I would have preferred to take the train!) Surprisingly the ride into London was actually quite enjoyable. It took us an hour of hard work under the leadership of uncle Mo Ladha, and I was proud of myself for not getting left behind and making it in one piece.

When we arrived, Green Park was busy, very busy. All of the SJ members had gathered in one large corner and there were many other people around as well. There was a BMX competition, lots of food and a chance to break some Guinness world records! all the bikes had been unloaded, a group photo had been taken and a short speech had been given we were ready to go.

The start of the ride was at Buckingham Palace. We rode all around London seeing sights such as the river Thames, St Pauls Cathedral, Trafalgar Square and 10 Downing Street ( quite a few people booed as they passed). The event was very diverse with a vast number of people old and young. It was very relaxed and you could set your own pace and get on and off the track whenever you wanted. The roads were closed, which made it much easier for less experienced riders. It was very enjoyable because the cycling made you more aware of the surroundings and it created more lasting memories.

After the ride we were all tired and we all ate lunch at Green Park with our friends. There were also places to buy food, drinks and best of all ice cream which was very nice. The adults also got to get their baraza helmets on! It was a really fun day for the family and we all really enjoyed it. SJ Cycling group rides are back!