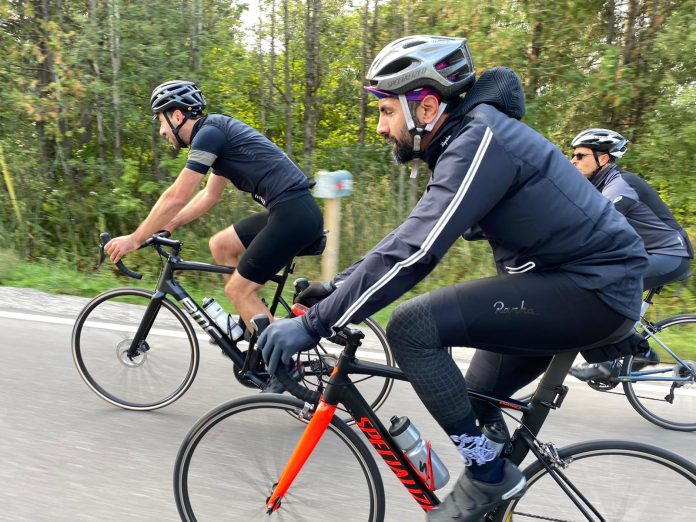 Jaffari Cycling Club Toronto was honored to participate and fund-raise for the Ali Asghar Water Appeal Sportive 2020 headed by Stanmore Jafferys Cycling of the UK.

Road cycling in Toronto in an organized manner within our community is in its infancy, but is growing fast, alhamdulillah. With co-ordination with Nasimco (North American Shia Muslim Communities Organization), we were able to fund-raise over $17,000 CAD (About 9,700 Sterling) so far for the Ali Asghar Water Appeal Project alhamdulillah, and setup our first dedication cycling ride.

Our ride was designed to be the approximate length of the Sportive 2020 in the UK from Stanmore to Windsor (return), about 87km. We started early on Sunday Sept, 20 at 7:00, from Jaffari Community Centre in Vaughan, ON, passing through various scenic spots around Northern Toronto such as Lake Wilcox, and Musselman’s Lake. These are part of many routes common to cyclists in the area. We added a final third break stop at Al-Hussein Foundation, site of the community’s Wadi-us-Salaam Cemetary, and then returning back to Jaffari Community Centre. Although the temperature was a cool 5 degrees Celsius (cool for a September morning), it did not deter the spirits and enthusiasm for the riders all assembled on time, ready to ride.

Total riders were 16, and alhamdulillah, all went well, and everyone stayed safe and reached the final destination, without issue. Reaction to the route and the brotherhood fostered for riding together and fund-raising for a fantastic cause were overwhelmingly positive, and every rider is now looking forward to a bigger and better ride next year insha’allah.

We are totally blessed by Almighty to have been given this honor and opportunity to make a little bit of difference in his way. We wish SJ Cycling a very successful and safe event on September 27th, insha’allah. #fundraisingtogether, #brotherhood, #aawa2020.