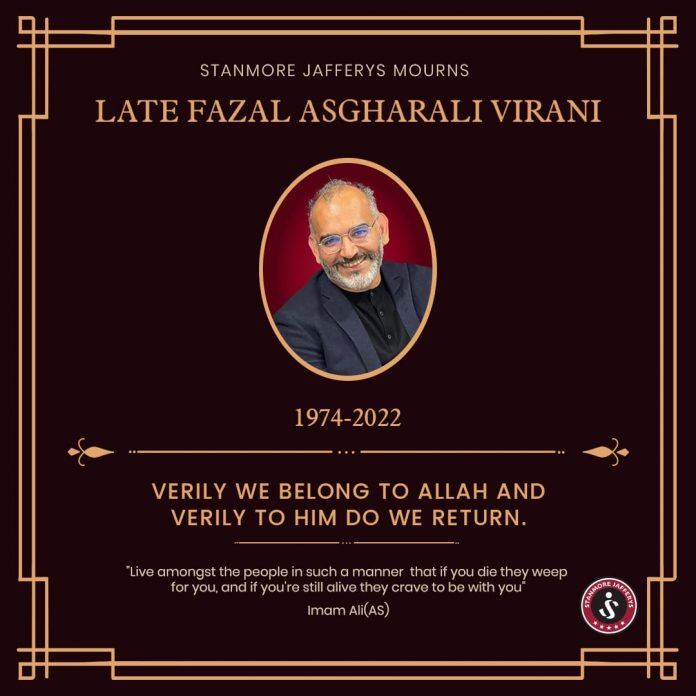 Those who say, when afflicted with calamity: “To Allah We belong, and to Him is our return” (2:156) Inna lillahi wa inna ilayhi raji’un

It is with deep sorrow that Stanmore Jafferys received the tragic news of the untimely demise of our mentor, friend and colleague Fazal Asgherali Virani. Witnessing the loss of a wise, dedicated and unassuming club leader, we are in shock and in flux after hearing of his sudden and abrupt passing – Stanmore Jafferys mourns! Bitter tears.

As this message is written, the Hujjat and Global community alike in general and the SJ family in particular is surrounded by a somewhat unsettling ambiance as the prefix ‘Marhum’ is hesitantly added to Fazal Virani’s name.

Walking in the footsteps of his marhum father whilst carrying the family torch and heritage of service to the community, Fazal depicted the true essence of a caring and compassionate personality in his own honest and sincere fashion from a very young age.

He saw his mission of not only promoting brotherhood but as a way of ensuring the club and his community kept our faith alive. Indeed, it is testament to the popularity of the man, how well-loved he is and how much he will be missed. His sense of accomplishment was humbled by his resonating feature and an acknowledgement of his heritage, understanding who you are and where you come from.

With an avid and keen interest in various sports disciplines, Fazal will in particular be remembered for his embodiment of ‘You’ll Never Walk Alone’ and ‘We love you, We do!’.

Fazal set off his SJ career in his teenage years at the Hujjat Annexe Car Park in the 1990’s where volleyball was played outdoors during the summer months.

His fervour and passion on the court enveloped his team with energy and vitality whilst radiating waves of respect across the opposing teams. His drive and desire on the court amongst his troops was equally balanced with protection and support only a true leader and captain can emanate.

Representing the SJ colours and badge in numerous national and international tournaments, over time and ultimately, he is recognised as a true SJ legend and a brand ambassador on the global community volleyball arena.

With altruism being displayed in various forms and on various fields, Fazal chose the silent and yet so powerful path of sharing his unconditional love by touching hearts on a personal level and sharing his fragrance of compassion without seeking the limelight. This very characteristic was evident from his early days where in line with his family DNA, emulating the spirit of Prophet Ibrahim, Fazal and his family would welcome people with open heart and arms to community and home alike. On the night of his departure, the centre was filled with friends filled with disbelief as they could not imagine no longer being able to share a meal or laughter with the man who had welcomed them to the Hujjat community via the SJ platform more than a quarter of a century ago. His ability to mix and speak numerous languages endeared him so well with both young and old and enabled him to bond with those new to the country as well as those who had been here for years. He was blessed with a great sense of humour and an ability to interact with people from all walks of life and ages.

As the Stanmore Jafferys Volleyball baton is now held by the subsequent members, Fazal was one of the very few remaining in the game from his generation. Whilst maintaining the same level of passion and eagerness to play the game, his energy and attention in the last 5 years gravitated more frequently towards developing and working with new players, both young and old. He was also instrumental in setting up and getting the ladies Volleyball up and running.

His vision of using sports as a way to bring the youth within the fold of the community was enviable and he used all his resources and skills to make his vision as reality. Many a youth owe their introduction to the game to Fazal’s tireless efforts as well as encouragement and support. Furthermore, he weaved his easy-going nature and deep-rooted faith by demonstrating how to be an excellent sportsman.

Just like one is certain of seeing the Boot Room in the stands at his beloved Anfield, Fazal was ever-present at Aldenham and his departure leaves behind a colossal legacy – which will truly dawn upon the club at the opening ceremony of SJ Wilayah Cup. Omnipresent at the tournament scene, Fazal is a monumental loss given his very adept operational skills, as well as an enviable international network. SJVB is incomplete without a Virani on the scene and Fazal truly represented.

The eldest amongst four brothers, he took on the mantle of being the ‘Big Brother’ to Mujtaba, MohamedAbbas and Murtaza after the untimely demise of his father. He started off in the family business followed by joining the banking sector with his career culminating in being a trader. In the last phase of his journey he found his true calling, by immersing himself in working with Zahra Trust, which became his passion and purpose of life. Dedicating time by discreetly helping out individuals and organisations (both internally and externally) in their time of need, he demonstrated delivery of a true ‘khadam’ as per the teachings of the Ahlulbayt (a.s.) – he was a supporter of the lonely, needy, destitute and orphans!

His departure leaves a huge vacuum amongst members of his family as well as the whole Stanmore Jafferys and Hujjat community. He reached out to old and young alike with the aim to bridge differences amongst ages by using his wit, charm and deep-rooted faith to ensure the younger generation remained on the path of the Ahlul Bayt (a.s). He kept flaming the candle of Saaf Mataam to ensure commemoration of the Aza of the Ahlul Bayt was never forgotten. He used sports as his vehicle to instil the love of community but foremost of God and godly values.

On behalf of the entire Stanmore Jafferys membership with whom he worked tirelessly, we convey our heartfelt condolences to the Virani family.

He is survived by his beloved mother Fatma Aunty, his soulmate Fatma (famously known as Fuf), daughter Maryam and sons Asgherali and Kadhim together with The Virani brothers, whose support has been cherished and humbly appreciated. We mourn and share your grief.

We pray to Allah (swt), through the intercession of our Holy Ahlul Bayt (AS) to grant him a place amongst the Holy family whom he so loved and followed.

O Lord, indeed, Fazal has become Your guest and You are the best of the hosts. O Allah, we do not know except good from him and You are more knowing than us.

Our prayers are that May Allah (SWT) grant him a high position in the next world and see his legacy live on. We pray to The Almighty to forgive him, accept his deeds and grant him proximity to the Ahlul Bayt (A.S.). Ameen.