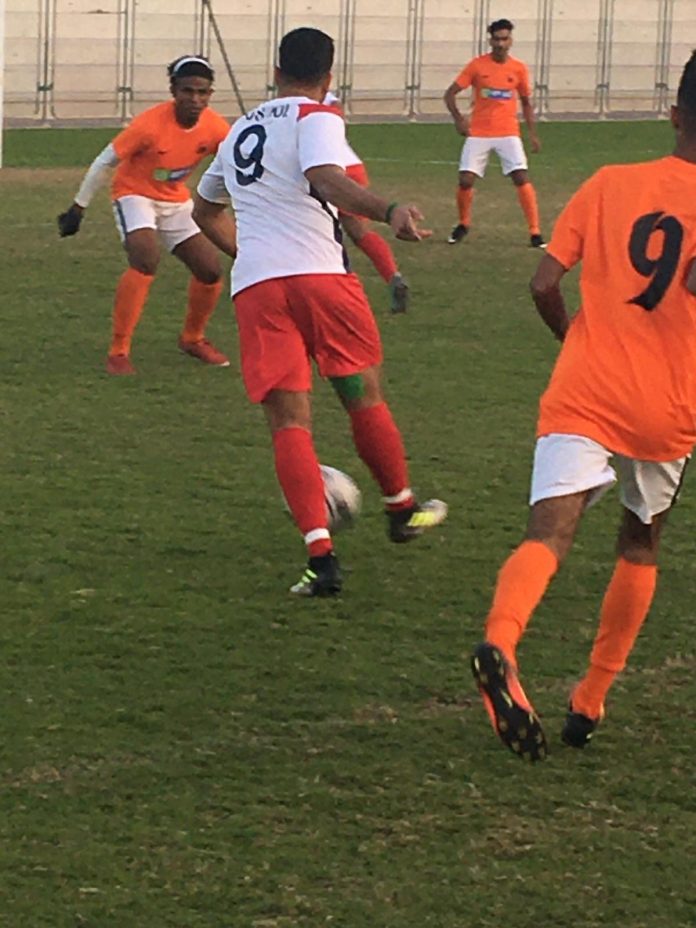 After months of hard work and preparation both on the pitch and off it, Stanmore Jafferys Football Club arrived in Dubai feeling confident and ready for a big tournament. Two strong sides had been assembled, led respectively by Murtaza Blue and Faz Mohammedali, with a number of close training games being fought out between the two before the sides jetted off to Dubai. Stanmore had a good blend of youth and experience, with some players attending their first overseas tournament whilst others attended their third of fourth.

Both Stanmore sides were chosen to play on the opening night, with the A team losing 1-0 very narrowly to Dubai A after a very dubious penalty decision. The B team drew 0-0 with Leicester after dominating the whole game, with Mahdi Shabir hitting the post 4 times in the game. Despite not having the greatest start, both sides maintained a positive approach, going into day 2 determined to bring some wins back to the camp.

Day 2 was a brilliant day for both sides at the tournament, with both the A and B team winning 2/2 games. Stanmore A released their shackles with a comfortable 3-0 win over Gloucester A, after which the B team stepped up and dispatched Nairobi 3-0, with the standout goal coming from Ammar Jetha, who picked up the ball just in front of the halfway line and ran through to the edge of the box and finished tidily ball into the bottom left corner. The A team then followed this up with a closely fought 1-0 win over Mombasa, with Hussein Gulamhussein stepping up to smash the winning goal into the top right corner, sending the side lines into delirium with a goal that can only be described as a worldie. The B team then completed a clean sweep of W’s for the day with a 3-1 win over Dubai C, which left them sitting top of Group C after 3 matches, knowing that they faced a very tough day 3.

Day 3 was a tough day for both sides, and as ever with tournaments, the niggles and knocks were starting to be felt. Stanmore B started the day with a 1-0 loss to Dar A, with Maisam Merali producing a ‘Herrera on Hazard’ like performance to man mark the star man in the Dar team out of the game, with the Dar goal coming from an unfortunate mistake. Stanmore A were in action next against a resolute Dar B side and ran out 2-0 winners. Stanmore B came out to play their second game of the day knowing that a win would confirm their qualification into the next round, and despite Madagascar C setting up incredibly defensively, a late winner from Ali Dharas confirmed Stanmore B’s entry into the next round. Stanmore A were then back in action against a tough Madagascar A side, who held them to a close 0-0 draw and saw Stanmore A finish 2nd in their group. Having sealed their qualification, Stanmore B’s final game of the group stages saw them draw 0-0 with Winnipeg Afghans, a very strong side who were amongst the favourites to win the tournament, and seal 3rd place in their group.

Round 2 saw the competition heating up more. 4 groups of 3 were made, with Stanmore A sitting alongside Winnipeg Afghans and Madagascar B, and Stanmore B facing Watford and Mombasa. Both sides knew that 1 win out of 2 would be enough to clinch qualification to the quarter finals. Stanmore A began the day with a closely fought 1-0 loss to Winnipeg Afghans in a game of few chances. Stanmore B faced Mombasa, knowing that 3 points in this game would almost certainly put them into the last 8. Mombasa set up very defensively, making it tough to break them down, and despite not playing their best, Stanmore B were able to secure a 1-0 win thanks to a penalty smashed home by Baqer Abboud, showing nerves of steel when it mattered most. Stanmore A knew they had to beat Madagascar to qualify, and duly complied with a 1-0 win. Stanmore B’s second game of the day ended in a close 2-0 defeat to a strong Watford side.

The quarter finals were highly anticipated, with some blockbuster games on show. Stanmore A vs Dar A. Two strong, attacking sides who both played very good football. Dar A came out stronger and after a high press, scored just before half time and went in 1-0 up at the break. Stanmore knew they could raise their levels, and they did just that. However, Dar scored again, and at 2-0 up, it was looking bleak for Stanmore. This must’ve awoken something in the Stanmore A players, as they realised they were going out of the tournament. Stanmore upped the pressure, and a deflected shot from the edge of the box from Husgul put Stanmore back in the game. 2-1. With the crowd on their side, Stanmore were fired up, only for Dar to put together a nice move straight from kick off and go 3-1 up! Heads were starting to drop as belief ebbed away from some of the crowd and probably a few of the players. Then came the storm. With 5 minutes to go, Abbasali Merali pounced on a mistake at the back to make it 3-2. With only added time left, Stanmore were throwing everything forward. With seconds left, Murtaza Blue won a free kick. Husgul ushered everyone away from the ball, ice running through his veins. Everyone could see the small gap in the bottom right corner of the net. Husgul stepped up, and with the help of a tiny deflection, sent the ball rocketing into the bottom right corner of the Dar net. The crowd went crazy, and a chant of ‘Siiiii Senor, give the ball to Husgul and he’ll score…’ was heard around the Iranian Club. Amidst all the drama, Maghrib time had set in. As soon as the full time whistle blew, the whole Stanmore team rushed to pray Jamaat namaaz, with extra time to come after. With the score at 3-3, and the pitch surrounded by spectators, extra time commenced. Within the first 30 seconds, Husgul found the ball at his feet on the left wing. He sat down the Dar captain (referred to as Van Dijk but changed to Nathan Ake by Maz) and raced through on goal, calmly slotting under the keeper to score his 3rd and put Stanmore ahead for the first time in the game. Stanmore were able to see out the rest of the game and were through to the semi-finals, 4-3 AET, with a hat trick from Husgul.

The B team faced the hosts, Dubai Stallions, in their quarter final. A strong start saw Ammar Jetha fire them into the lead, but as Dubai grew into the game, the pressure mounted. A highly contentious penalty was awarded against Stanmore for a supposed handball, yet the player was clearly 2 yards outside the box. Dubai dispatched the penalty and went into half time at 1-1. The game swung towards Dubai in the second half, but Stanmore held on, and even created a couple of chances to win the game but were unable to take them. As the teams entered extra time, both sides looked a bit weary. Then out of nowhere, the Dubai striker scores an absolute screamer, arguably goal of the tournament, and just like that, Stanmore B had been knocked out. They faced many of the top sides in the tournament and held their own, with a number of disciplined and solid performances, but on this occasion, it wasn’t to be.

Stanmore A faced a very strong Watford side in the semi-finals, and knew they had to be at their best to beat them. Stanmore A had more of the ball in the first half and created two glorious chances but were unable to convert either. At half time, there was a real feeling that they could go on to win the game. Late in the second half, Watford fired in a quickly taken corner, and with the help of a slight deflection from their striker, the ball somehow found its way into the back of the net. After this, Watford shut up shop, and despite their best efforts, Stanmore A were unable to break them down and bowed out of the tournament.

All in all, SJFC had a fantastic tournament. Despite not bringing back any silverware on this occasion, both teams really showed their quality and their drive, exhibited by Stanmore A’s quarter final win, which I think is fair to say was SJFC’s highlight. As a club there is always the feeling of regret and ‘what could’ve been’, but I think its fair to say that everyone gave their all and as always, we will come back stronger. We will continue to develop and nurture our youth, and make sure we are even more prepared for next time.

Lastly, as a club we wish to thank the SJ board for all their support behind the scenes, both in the build-up to and during the tournament. Uncle Mo Valjy, Huss Pirbhai Sr and Shafique Govani have given us nothing but their full support and we really appreciate all their efforts. Shafique uncle was at every single football game to support us, console us and encourage us, and we cannot thank him enough for his help whilst out in Dubai.