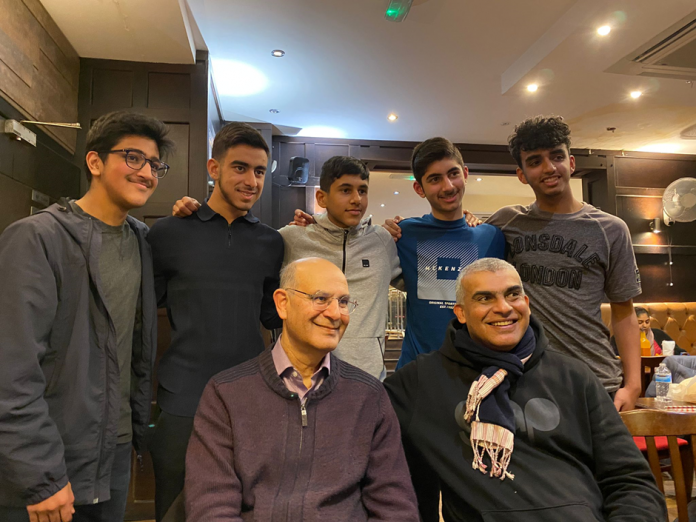 Wembley and Harrow’s newest team in their 6th division was unique in the fact that all members of the team were students, trainees and graduates of SJ’s Table Tennis Program.

Led by the guardian angel figure of Hussein uncle Juma and some coaching from Uncle Mo, under the guise of Kenton H, clinched the title in their inaugural season by merely one game, in a tense finish in which every single match had mattered.

The team of Husayn Yahya Merali, Jabir Dhalla, Husayn MH Merali, Zahid Jamal and Alireza Hamir started off this season with intense training on a Monday night. Alternating between technical and game-based drills ensured not only were the physical movements broken down and improved, but through exercises designed to mimic match play, pressure points and adversity, the mental game was ready for a season in which you could not take your foot off the gas.

The league’s format works like this : every team in the division plays each other twice – home and away;  plays 9 best of 5 matches, whereby the three members of each team play each other. Despite getting to 5 and ‘winning’ the match all games are completed – meaning you are rewarded by the margin of success.

The beauty of having 5 players was quickly recognised as teammates regularly filled in for each other, whether it be exam, sporting or family commitments.  At every game we were supported and coached with our own Mr Miyagi – Hussein Uncle’s face was a constant, as were his superior tactics.

Shooting to the top of the league, there was only one team who stayed with our ascent – Lowlands. Our first fixture there was with the guest appearance of legend Aasif Karim, and alongside MohamedAbbas Uncle and Hussein uncle present was the trifecta of Racket sports excellence within our community.

Unfortunately, despite valiant performances including a 5 setter in which every game went to deuce between the top seeds, we were edged out 4-5 – although we did miss Jabir Dhalla to illness that day.

Despite the loss, the deficit was only by 1, so we remained at the top of the league. Our Cobra Kai-like lack of ‘mercy’ and efficient beating of inferior opponents was rewarded.  What was noted by parents and players alike was the improvements that all players had made during the season.

Alongside our winning campaign in the league was our participation in the internal cup competitions, to which doubles is a fixture – after winning our first match, a sub-strength team succumbed to a higher division team to end our knockout pursuits.

However, the season effectively culminated into a final in the second last game week- our reverse fixture against Lowlands. This time leading by 3, any loss greater than 4-5 would mean the title is out of our hands. It was a hard fought match, with 5 of the 9 going to 5 sets again – notably a comeback from 8-2 down to win the 5th for Jabir, accompanied with some ridiculous backhand play and rallying ‘chole’s – carelessness from myself earlier meant that we needed to win one of the last two to stay ahead of Lowlands by at least 2.

A strong fight back from Husayn was ultimately just short – 5 sets decided effectively on the luck of the net cord meant we needed to win the last match.  It was a great match, long fast forehand rallies meaning that the winner came down to whoever struck first. After my opponent came back from two sets, an 11-5 win in the decider meant that come the next week, an 8-1 win at worst would secure us as champions.

Our match against Oshwal got off to the worst possible start. With Hussein uncle busy with his own fixture, he was checking his phone like Pogba on deadline day for any updates, and a second seed loss meant we needed to win the next 8 in a row. The first seed match wasn’t looking bright. One set down and 10-6 down, knowing what was on the line, I managed to fight back to 11-10 – and missed a routine smash to finish it off, but did so at the second time of asking, meaning a 3-1 win was on the proceedings. Husayn moved past the third seed with ease, as did Jabir in a routine win against his three opponents, starring a backhand smash with nothing held back.

To win the division, Husayn MH Merali had to beat the first seed – a tough ask, but one he was up to, with fantastic serving backed up with controlled aggression meaning that he led 2-1 up.  Racing to a 7-2 lead, some signs of nerves came close to upending our plans – 7-6 – but 4 points later, Husayn won the match, and with it the League.

A victory dinner at Toro’s was on the menu – a celebration of a season in which we had surpassed all expectations.  As we enjoyed our steaks we had time for a season debrief and introspection into what we learnt, how to improve ourselves and the potential we have as a team.  Hussein uncle’s poignant speech was a reminder of the importance of giving back to the community, and we are proud to see it come to fruition in terms of a title.  We are once again reminded how lucky we are to have such a platform to play, and how privileged we are to be in mentorship of such rich expertise of Hussein Uncle Juma and Mohamed Abbas Merali.

We hope to use this to springboard further successes in higher divisions, and also to improve the next generation of sportsmen/women.