SJ will be represented at the Zainabiya Sports Club Top Spin Unity Table Tennis Tournament which will take place at the Kingston Table Tennis Centre in Milton Keynes this Sunday 12th January 2020.

The idea of the tournament was to bring multi faith communities together through sports.

Not only enjoying the sport they love to play but also a chance to meet and network with people from different faiths from Milton Keynes and across the country.

The special invited guest Andrew Baggaley (World Ping-Pong Champion) will also be present later in the day along with his brother/coach Stephen Baggaley who is also playing a major part in the organising of this event with Faraz Mohsin (ZSC Head of Table Tennis).

The event will also be commentated by Nick London who is a FIFA/UEFA commentator.

The matches will take place between 10am and 4pm.

SJRS will be represented by the following squad:

SIBTAIN ALLIBHAI
Playing Table Tennis since childhood and have won many awards however due to busy work routine and also active in other racket sports, never got time to play regular / league to improve my game. Now playing more for fitness and fun. Love the game. Serve & Spin is what I do best and always ready for a challenge. I believe Table Tennis is an excellent game for hand – eye coordination and improves your reflexes and fitness.

JABIR DHALLA
I started playing Table Tennis less than 2 years ago, when SJ started their sessions in Harrow Leisure Centre. I had not held a table tennis bat before than and started enjoying those sessions with Hussein Uncle and Nazir Uncle. I now regularly play for SJRS, my school team and play competitively in Division 6 for Kenton Table Tennis Club in the Harrow and Wembley League. Apart from Table Tennis, I enjoy playing other sports like Badminton, Tennis and football.

SEYED MOAHMMED JAWAD SHAHRESTANI (aka Jay)
I’m a marketing professional and founder of IranMyWay. A lover of sports, especially Table Tennis, Road Cycling, Tennis and Skiing. In Table Tennis, I won two trophies at Stanmore College in 1995 and 96. 23 years later, I won the Intermediate Closed SJRS TT competition in Nov 2019. Me and my 8 year old son play every week with the rest of the Stanmore team, we’ve got a great team spirit and coaching support. The TOP SPIN UNITY Table Tennis Tournament gives me an opportunity to test my skills again. After this, I’ll be preparing for the SJRS in July 2020.

HUSSEIN JUMA
I am 64 and started playing TT at the age of 12 in Uganda. I started playing in the Wembley and Harrow TT League in 1973. At present I play for Kenton TT Club in division 3. At LSE, I was fortunate enough to train with a fellow student, Ivan Chan who in 1977 won the British Universities Open Championships. For the last 3 years, I have been assisting with the development of TT at our local mosque. I assist the coach at the Saturday sessions with the coaching of new kids. I really enjoy these sessions as it gives me great pleasure to pass on my skills to the younger players. My passion and best sport is Tennis which I have played competitively since age 11. At age 14, I received coaching by two Wimbledon Champions Arthur Ashe and Stan Smith who offered me a Tennis Scholarship in USA but my parents refused to sign the contract. Apart from a gap of 4 moths due to an ankle injury, I have played Tennis regularly for various clubs in the Middlesex League since 1972. Playing Tennis and TT has enhanced my life, contributed to my personal development and met some wonderful people some of who have become my mentors and best friends. When I retire, I intend to set up a Sports Foundation to promote and develop young talented TT and Tennis players.

ALI_REAZA DAYA
Fairly new to playing table tennis regularly but loving it. All shots are beautiful in their own way but there’s nothing quite like a smash down the line to win a point! Other than table tennis, I eat, sleep and drink football, support Watford, and sell seafood for a living!

SHIRAZ JAMAL
I grew up in Bombay, India and was fortunate to be in a school in which Sports was a religion. I played a wide variety of sports, but concentrated seriously on Badminton and Table Tennis, in both of which I reached Inter-State level in the under-18 age group. I played in tournaments all over the country. At 17, I left for the US for university and unfortunately did not play much sports during those years. After graduating, I moved to Uganda where I started playing tennis with a coach on a regular basis. In 2015, I moved to this country from Uganda and I wanted my 2 sons to start playing Table Tennis and Tennis. Fortunately, I happened to meet Hussein uncle Juma, who not only introduced and coached the sport to my sons, he also pushed me to restart the beautiful game. And so I did and here I am. I’ve been playing with Hussein uncle and Mohamedabbas Merali for Kenton TTC in the Harrow&Wembley winter league for the last 4 seasons, starting from division 6 and moving up to Div 2 and now in Div 3. I am now 44, but my mind still thinks I can play like I’m 17!! My favourite shots are the forehand loop and backhand smash. I look forward to playing in the Top Spin Unity tournament in Milton Keynes on the 12th of January and hopefully put on a good show! Let’s have some fun.

MOHAMMAD ABBAS MERALI
I am the current SJRS festival champion having won it over the last two years. I am also the Current Stanmore Jafferys table tennis coordinator. My love for table tennis was born in Nairobi, Kenya when my schools lab assistant happened to be Uganda number 1. He coached me during lunch times and gave me a good foundation. I currently play in Div 3 of the Wembley and Harrow League and my favourite shots are my serve and loop. I love playing table tennis and also giving back to the community through sport. I also play tennis competitively and have played cricket to a high level in my younger days. I am an Office Manager and run a Citizens Advice Bureau.

IRFANALI SHIVJI
I have been playing table tennis for over 15 years. The science behind the sport inspires me to learn more and analyse different skills and strategies. I enjoy coaching and sharing my knowledge of the sport. I play competitively in the Wembley and Harrow local league for Kenton . My objective this weekend is to win the plate tournament.

JAVED KANANI
I first started playing TT at the age of 14yrs where I represented my school team as captain. I had been on and off the table due to injuries but have recently taken it up again and have enjoyed playing TT now competitively for 3 years as captain of Kenton TT club division 6 in the Wembley & Harrow league.

FAIYAZ NURMOHAMED
My first sport was Tennis. I started playing TT in the late 80’s before taking sabbatical for approx 15 years. I’ve represented my community in tournaments and for Kenton Club in the Wembley & Harrow League Playing TT has given me a new lease of life and along the way I have met wonderful people some of whom are also in the SJ team 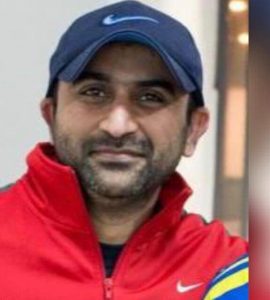